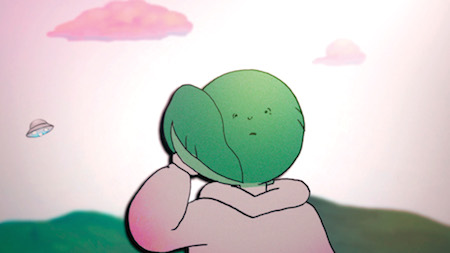 This exciting selection of experimental animated works from Japan, selected and compiled by the Japan Society for Japan Cuts 2016, represents a broad range of contemporary avant-garde practice. The titles range from 3 to 14 minutes, adopting the full breadth of styles in new animation, from visual music to raunchy music videos, digital processes to analogue filmmaking, and minimalist atmospheric shorts to narratively rich miniature epics. All evoke completely unique worlds.

The Modern is grateful to the Japan Society for their assistance in making this screening possible.

Mono No Aware, (2016) 8 minutes
Various works from the participants of Mono No Aware's Hand-Drawn Animation Workshop held at Japan Society on June 18.

Land, (2013) 4 minutes
Shape shifting animal and geometric forms stun in this piece with music and sound by Aimar Molero.

lost summer vacation, (2015) 3 minutes
The mystical happenings of a tropical island are pictured in an animated scroll.

Holiday, (2011) 14 minutes
A delirious, deeply romantic tale of love and loss featuing a girl, a golden nude and an akahara imori newt in a gondola resort.

Zdravstvuite!, (2015) 6 minutes
"On a summer day a strange man who teaches Russian at the beach took me to a town."

such a good place to die, (2011) 14 minutes
Forms shift like a landscape of memory in this enchanting work featuing music by Tatsuki Tsushima.