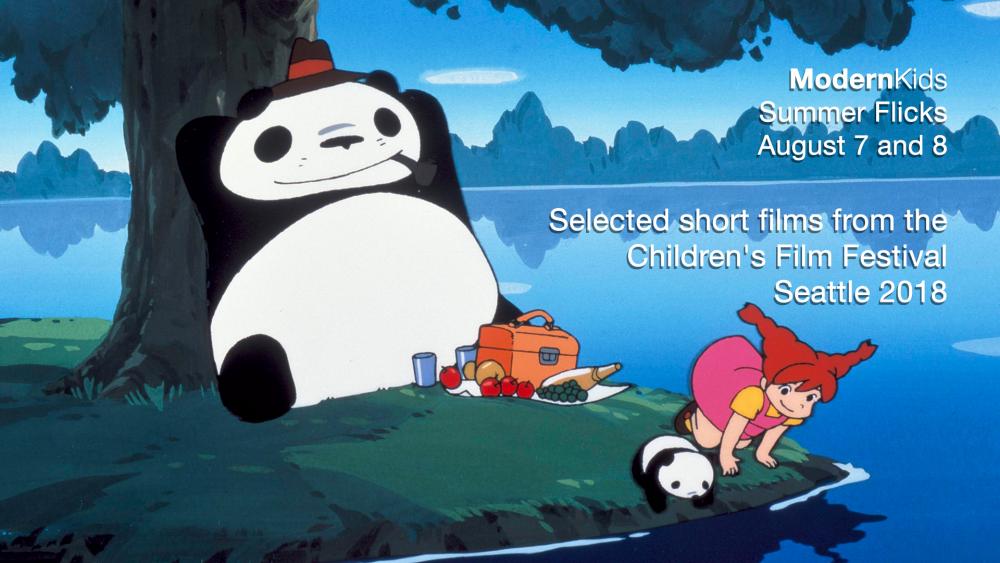 Take a break from the Texas heat for Modern Kids — Summer Flicks! Share the art of the screen with your children as they watch stories unfold and ideas form in delightful and innovative films. The bonus for seeing these films at the Modern is the opportunity to visit the galleries before or after and experience the wonder of the paintings, sculptures, installations, and videos throughout the museum, including those in the special exhibition Takashi Murakami: The Octopus Eats Its Own Leg.

Admission is free and open to the public. Films are shown in the Modern’s auditorium, and seating is limited to the first 250 guests. Admission to the galleries is free for film festival guests. All ages are welcome!

Panda! Go, Panda!
(1972, 34 min, G, ages 3-5)
Two pandas that have escaped from the zoo bring joy to the life of a small girl in this lively animated short, which was the first real collaboration between legendary anime filmmakers Isao Takahata and Hayao Miyazaki. Miyazaki went on to earn three Academy Awards for Best Animated Feature Film, and Takahata received the same award in 2016. Panda! Go, Panda! © TMS. All Rights Reserved.

(73 min, all ages)
Dive into exciting adventures, vibrant colors, and exquisite storytelling with Children's Film Festival Seattle 2018: Dig Deep, Fly High, a timeless collection of 11 animated films from 9 countries. Chase a kite into a mysterious cave, discover how to light up a dark forest, fill up a marvelous hole in the ground, soar with a flock of birds, find out the way to wake up a whole town, swim with a magnificent orca, and discover all the things that make you special!

The Little Bird and the Caterpillar
(Lena von Döhren, Switzerland, animation, 2017, 4 min, nonverbal)
A little bird has plenty of peace and quiet high up in its tree, at least until an uninvited guest shows up!

A Hole
(Maribel Suárez, Mexico, animation, 2016, 4 min, nonverbal)
A little girl, delighted and intrigued by a hole, offers it all kinds of presents and treats.

The Reflection in Me
(Marc Colagiovanni, USA, animation, 2017, 3:43 min, English)
A girl glances in a mirror and sees a friend peering back at her.

Weasel
(Timon Leder, Slovenia, animation, 2016, 11:35 min, nonverbal)
A hungry Weasel sneaks up on a flock of birds living on the last standing tree, but then disaster turns into something completely unexpected.

Awaker
(Filip Diviak, Czech Republic, animation, 2017, 9:31 min, nonverbal)
Long ago, in a cold Nordic country, a man toils at his job of waking people up. But one day, a shiny bell changes his life.

The House of Colors
(Nicolás P. Villarreal, Argentina, animation, 2017, 9 min, Spanish with English subtitles)
A young girl wishes to live inside her favorite television show, but the wondrous trees of La Plata, a mysterious house, and her loving mother's secret, cause her to change her mind.

Autumn
(Helene Letourneur, France, animation, 2016, 3 min, nonverbal)
Autumn is in a hurry to paint her colors on the world. But there isn’t much time: Winter is on the way.

The Mountain of SGaana
(Christopher Auchter, Canada, animation, 2017, 10 min, nonverbal)
As a young fisherman cruises along a rugged shoreline, a tiny mouse in Haida regalia appears and starts to knit a blanket. A story unfolds on the blanket as it grows longer, illustrating the ancient tale of Haida master sea hunter Naa-Naa-Simgat and his beloved, Kuuga Kuns.

Rainy Day Circus
(1973, 38 min)
Following the success of Panda! Go, Panda! Miyazaki and Takahata created Rainy Day Circus, which follows Mimiko and the Pandas as they befriend Tiny, a lost baby tiger. When a storm floods their town, Mimiko organizes the rescue of the circus animals, including Tiny’s mother.

Kubo and the Two Strings
(2016; 101 min; PG - contains scary images, action, and peril; ages 6 and above)
“Kubo is bold and daring, telling a truly unique tale set in ancient Japan that is rich with the depth of a story passed down for generations.” Adam Graham, Detroit News. Clever, kindhearted Kubo ekes out a humble living telling fantastical stories to the people of his seaside town. His relatively quiet existence is shattered when he accidentally summons a mythical spirit from his past that storms down from the heavens to enforce an age-old vendetta. With the help of his shamisen – a magical musical instrument – Kubo must battle gods and monsters, including the vengeful Moon King and the evil twin Sisters, to unlock the secret of his legacy, reunite his family, and claim his heroic destiny.