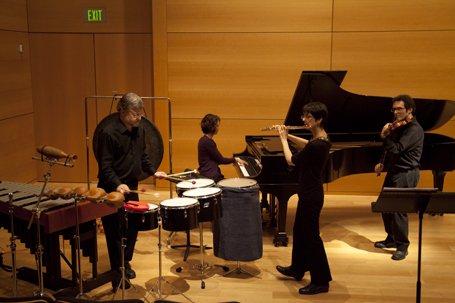 Sounds Modern Celebrates 10 Years!
Sounds Modern
The most up-to-the-minute and least predictable concert music series in the Dallas-Fort Worth area, Sounds Modern celebrates its tenth anniversary with an event on Saturday, December 16 at 2 pm in the Modern's auditorium. Concerts in the series explore the links between contemporary music and visual arts, connecting thematically to exhibitions at the Modern Art Museum of Fort Worth (and other contemporary art venues). The December concert, in conjunction with an exhibition of works from the Modern's permanent collection, connects with the tradition of abstract visual art in America, and the abstract expressionists of the 20th century in particular.
For our tenth anniversary, we will revisit the composer from our inaugural concert, Morton Feldman, this time paired with Feldman's close friend Earle Brown. Both composers works were deeply affected by their connections with visual artists. Inspired by the mobiles of Alexander Calder and the action painting of Jackson Pollock, Brown composed works that explore open forms, in which materials are assembled and re-formed by the musicians in the moment of performance. Morton Feldman, who counted Robert Rauschenberg, Willem de Kooning, Mark Rothko, and Philip Guston among his friends and thought of his scores as "sound canvases," created quietly intense works that explore sound as if it were the play of light on the threads of a tapestry.
Directed by flutist and modern music guru Elizabeth McNutt, the Sounds Modern series brings a sonic dimension to the groundbreaking artwork presented at the Modern. More information at http://soundsmodern.org and http://facebook.com/soundsmodern.
Who:   Sounds Modern, Elizabeth McNutt, director
What:  Tenth Anniversary Celebration
Where:  Modern Art Museum of Fort Worth, 3200 Darnell Street, Fort Worth,
When:  2 pm, Saturday, December 16,2017
Admission:  Free of charge and open to the public. (Gallery admission not included.)
Back to top