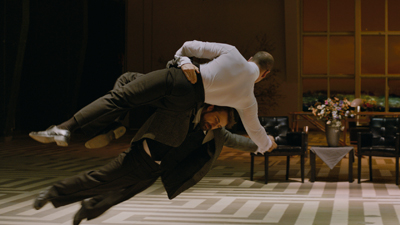 "Coup De Grâce" (2011, Netherlands, 26 min.) -- A film about the collapse of a friendship; about what is broken and what cannot break. After a long separation, two men meet again in a massive building at a remote location. In the course of the evening and an icy night, they fight a weaponless, exhausting duel. Performed by Damián Munoz and Jordi Cortés Moliña, directed by Clara van Gool (Enter Achilles). (Awards: Best Short Film, NOVES VISIONS, Sitges Film Festival, 2011 Spain; Best Screen Choreography, Cinedans Dance On Screen Festival 2011, Amsterdam)

"Labyrinth Within" (2011, Sweden, 28.5 min.) -- A haunting tale of jealousy, this existential thriller posits a man, a woman, and an elusive lover in a series of intense pas de deux in a stark apartment that becomes a fourth character. Danced to a commissioned score by David Lang with solo cello by Maya Beiser, the work features New York City Ballet principal Wendy Whelan, Giovanni Bucchieri, and Pontus Lidberg, a Swedish choreographer (The Rain, Mirror) also known for his work with Morphoses. Local audiences raved over Lidberg's film "The Rain" when it was screened in at The Modern in 2009. (Awards: Jury Prize for Best Picture, Dance On Camera, NYC, 2012; "Court-Métrange du Jury" prize at Court-Métrange Film Festival, Rennes, France, 2011)

"Sand" (2010, USA, 10:10 min.) -- A rhythmic and visual collage, this engaging short takes a loving and nostalgic look at the legacies of bodily knowledge as they are transferred from dancer to dancer, and father to son. Sand dance stems from turn of the 20th century vaudevillian and traveling shows, with only a handful of people still performing it, this film is a rare archive of the transference of sand dance or "passin' the sand" from one generation to the next. Featuring emerging tap dancer artist Kenjii Igus and his father Darrow, director Cari Ann Shim Sham.

Contemporary Dance/Fort Worth and the Modern Art Museum of Fort Worth are celebrating modern dance and contemporary dance during the Modern Dance Festival. For more information visit www.cdfw.org.