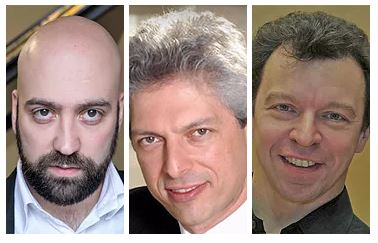 When Alessandro Deljavan performed for CMSFW in 2014, the Theater Jones critic wrote: “Deljavan’s performance was revelatory in every respect.  Everyone in the hall knew that they were hearing something special—something wonderful—from the very first notes.”  The guest cellist on this concert is Sergey Slovachevsky.  A consummate chamber musician, his collaborations include the Tchaikovsky Piano Trio, Ars-Trio di Roma,as well as in piano trio in Vienna with the concertmaster of the Vienna Symphony Anton Sorokow and the director of the  Vienna Conservatory Ranko Markovic.  Mr. Slovachevsky is the head of cello studies at the Schnittke State Institute of Music in Moscow.   Mr. Slovachevsky and Mr. Deljavan join CMSFW Artistic Director and violinist Gary Levinson in a  performance aptly titled “Humor and Melancholy “ – a reference to the wit and charm of the Beethoven and Haydn trios and sensibility of Dvořák .

​The Ensemble opens the concert with two piano trios, one by Beethoven and the other by Haydn.  They were composed just years apart in the 1790s.  Beethoven’s Trio, No. 1 is, also, one of a set of three piano trios.  It was first performed in 1795 in the house of Austrian Prince Lichnowsky, to whom it is dedicated.  Haydn's Trio in C Major was published in 1797 is one in a set of three dedicated to Theresa Bartolozzi, a London friend and an accomplished pianist.

Dvořák composed the last piece on the program one hundred years later in 1891.  When the trio premiered in 1891, Dvořák was the pianist.  Dumky is a term introduced into Slavic languages from the Ukrainian and refers to epic ballads, specifically a song or lament of captive people.