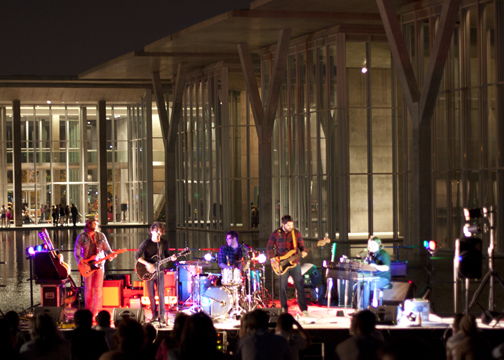 $15, free for Modern members
Tickets will be sold at the door. For advance tickets call 817.738.9215 or visit the Modern’s admission desk.

The Modern Art Museum of Fort Worth is proud to announce the eighth Modern 'til Midnight on Saturday, April 14. An eclectic array of live music will be featured during the Modern's extended, late-night hours. In addition, guests will have the opportunity to enjoy unique gallery activities, films, prize drawings from the Modern Shop, and exceptional cuisine from Café Modern.

The following lineup of musicians will perform outside against the Modern's reflecting pond:

Air Review
The Dallas rock quintet's dynamic shows have allowed them the opportunity to share stages with the likes of Portugal the Man, Bowling for Soup, Blue October, The Boxer Rebellion, and One Eskimo.

Calhoun
"The phrase 'pure pop perfection' is likely an overused crutch in the lexicon of music criticism. Also, it's likely typically used for fare that usually finds itself residing on the Top 40 end of the dial. With all of that out of the way, allow us to proclaim that Calhoun's newest album, Heavy Sugar, is indeed pure pop-rock perfection." - Kelly Dearmore, Best of Texas

The Angelus
Led by the enigmatic vocal powerhouse Emil Rapstine, whose brooding tones and mesmerizing stage presence bring to mind any number of iconic front men from Morrissey to Nick Cave, and backed by four young men who quietly summon up epic sounds that build like storm systems and burst into bone rattling sonic downpours, The Angelus often leave even the hardest hearted hipsters teary eyed and shaken.

Café Modern and Lobby Bar
Cash bars are available from 6 p.m. until last call at 11:30 p.m. Enjoy a global assortment of Modern appetizers and Café Modern food service in the restaurant from 6 to 9 pm. The Modern Grill will have hamburgers, hotdogs and picnic fare available for dining outside on the lawn from 6 to 11 pm. Beverages and food are not included in admission price.

NEW! Café Modern will have picnic basket dinners for 2 available to pre-order for $40.

Happenings in the Galleries
Special exhibitions Glenn Ligon: America and FOCUS: Katie Paterson will be on view in the galleries along with select works from the Modern's permanent collection. Throughout the evening there will be special activities in the galleries, including spotlight tours, and art explorations. Admission includes access to galleries.

Glenn Ligon: AMERICA
Glenn Ligon: AMERICA is the first comprehensive, midcareer retrospective of Glenn Ligon (b. 1960), widely regarded as one of the most important and influential American artists to have emerged in the past two decades. Organized by the Whitney Museum of American Art and curator Scott Rothkopf, in close collaboration with the artist, the exhibition surveys 25 years of Ligon's work, from his student days until the present. The exhibition features roughly 100 works, including paintings, prints, photographs, drawings, and sculptural installations, as well as the artist's recent, striking neon reliefs. The retrospective also debuts previously unexhibited early works, which shed light on Ligon's artistic origins, and for the first time reconstitutes major series within his work, such as the seminal Door paintings that launched his career.

FOCUS: Katie Paterson
Katie Paterson is known for her multidisciplinary and conceptually driven work, with an emphasis on nature, ecology, geology, and cosmology. Many of her installations are the result of intensive research and collaboration with specialists as diverse as astronomers, nanotechnologists, and fireworks manufacturers. Recent works in her exhibition at the Modern include: All the Dead Stars (2009), a large map documenting the locations of the 27,000 dead stars known to humanity; and Light Bulb to Simulate Moonlight (2009), an incandescent bulb designed to transmit wavelength properties identical to those of moonlight.