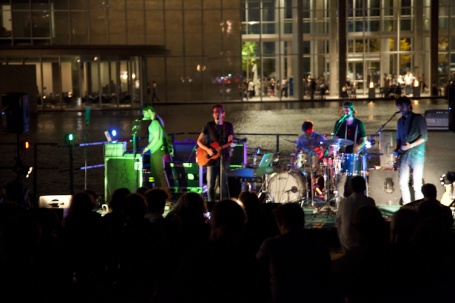 Admission is $20; advance tickets no longer available, please buy at the door.
Free for Modern members

In the case of inclement weather, concert will be moved inside. Program schedule subject to change. No refunds.

The Modern Art Museum of Fort Worth is proud to announce the ninth annual Modern ’til Midnight on Friday, October 11, from 6 pm to midnight. An eclectic array of live music will be featured during the Modern’s extended, late-night hours. In addition, guests will have the opportunity to enjoy unique gallery activities, films, and exceptional cuisine from Café Modern. Admission is $20; free for Modern members.

The following lineup of musicians will perform outside against the Modern’s reflecting pond:

Dan Croll
“He could have been a rugby player, but this boy From Nowhere has turned to folkie-endorsed electronic music instead. Think Paul Simon jamming with Prince.” Paul Lester, The Guardian.

Yells at Eels
Yells At Eels, led by world-renowned trumpeter Dennis Gonzalez, is Dallas's premier family jazz trio, and this is their 14th year of existence, having traveled all over Europe, the US, and Mexico to spread their message of music and high-energy fun.

Cleanup
Steve Watkins of DFW.com writes, “Some bands I have to warm up to, but these guys won me over right off the bat with killer jazz/prog rock instrumental sound that woke up the room. [Kyle] Harding's bass work is phenomenal; and while I am most familiar with Landon [Cabarubio]'s keyboard work . . . his guitar leads were at once frantic, precise and tastefully done.” Watkins goes on to say, “There are a lot of musicians that can play fast, but it's rare to find a band so unbelievably tight and intricate."

Film Program
Modern ’til Midnight features a screening of Sinfonía de Opuestos (Symphony of Opposites) in the auditorium at 8 pm.

Sinfonía de Opuestos
From 27 Mexican films made between 1919 and 2005 with plots and characters directly relating to Mexico City, Diana María González Colmenero has developed a chronicle of the city through its cinematic representation. From these films, she has extracted sequences starring the city itself, disregarding each movie’s plot. These sequences, shots, frames, and atmospheres have been reconstructed in video by reshooting the exterior locations of the films in the present. González Colmenero uses this material to create a video essay that analyzes the transformation of the city through changes in the landscape, transport, industrialization, costumes, traffic, modes of behavior, and groups of people in public spaces, among other aspects.

Café Modern and Lobby Bar
Cash bars are available from 6 pm until last call at 11:30 pm. Enjoy a global assortment of Modern appetizers and Café Modern food service in the restaurant from 5 to 9 pm. The Modern Grill will offer hamburgers, hot dogs, and picnic fare available for dining outside on the lawn from 6 to 11 pm. Beverages and food are not included in admission price. Bars are cash only.

Café Modern will have picnic basket dinners for two available to preorder for $40.

The Modern Glow-in-the-Dark Pop Up Shop
The Modern Shop moves outside! Visit the Shop by the pond. Purchase a t-shirt at the Pop-Up Shop during Modern ’til Midnight, and get a free tote bag!

Happenings in the Galleries
The special exhibition México Inside Out: Themes in Art Since 1990 will be on view, along with select works from the Modern's permanent collection. Throughout the evening there will be special activities in the galleries, including spotlight tours, and art explorations. Modern ’til Midnight admission includes access to the galleries.