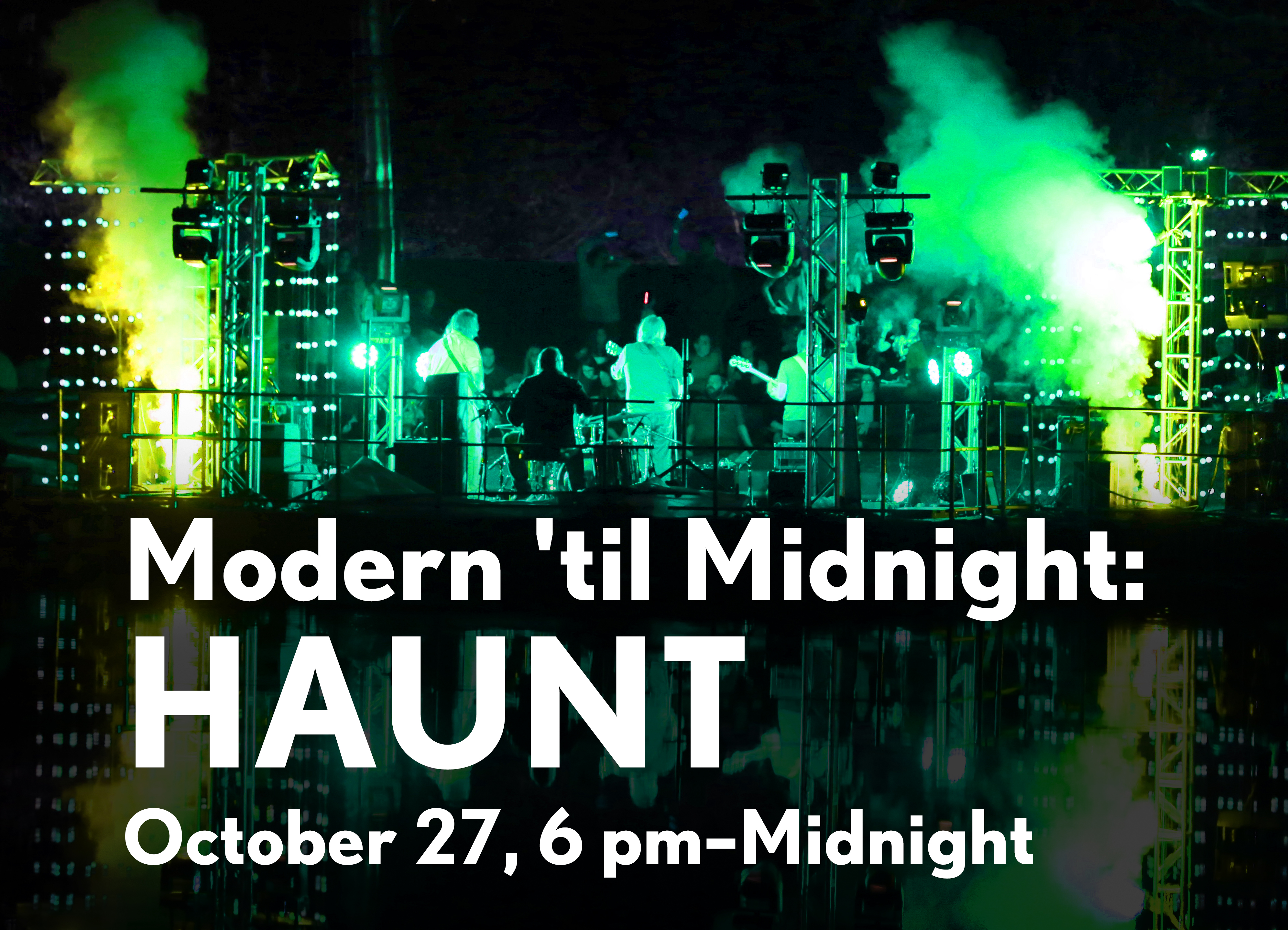 Join us for an eclectic array of live music featured outside against the Modern's reflecting pond during the Modern's extended, late-night hours. Guests will have the opportunity to enjoy unique spotlight tours in the galleries, a DJ and dancing in the Grand Lobby, prize drawings from the Modern Shop, and exceptional cuisine from Café Modern.  Dress up for the Modern Costume Contest! Picnic dinners are available with advance reservations, www.themodern.org.

This one-of-a-kind museum event includes live performances by national and local bands on the lawn. During late-night hours, guests will have the opportunity to explore the exhibition Misty Keasler: Haunt, join spotlight tours, enjoy spinning, dancing, and other artful antics from Ronnie Heart in the Grand Lobby, and dine on exceptional cuisine from Café Modern and the Modern Grill. Stop by the Modern Shop and enter to win a goody bag full of our favorite things! Haunt the evening by dressing up and participating in the costume and dance contests (sorry, no masks allowed).

In case of inclement weather, the performances will be moved indoors.

PARKING NOTE:  We have additional parking reserved for our guests including the Casa Manana and Kimbell Art Museum parking lots. Cash valet is also available near the front door.

The following lineup of musicians will perform outside against the Modern's reflecting pond:

The Bright Light Social Hour
11 pm–12 am
Since releasing Space Is Still the Place in 2015, The Bright Light Social Hour have toured internationally, released the collaborative EP Neighbors with psych-folk guru Israel Nash, and composed the theme music for Bryan Cranston and Giovanni Ribisi's Amazon series Sneaky Pete. They continue to forge forward, peering deep into the future and constructing musical bridges to the here and now.

"We became really interested in mixing southern aspects of music - soul, rock, blues, those sort of things - with a progressive outlook, where we got really into dance music, house music, techno, psychedelic rock," [bassist and vocalist Jack] O'Brien said. "We became really interested in mixing all those sounds; something future-looking and also vibe-y and comfortable, but different all together." Huffington Post

Israel Nash
9:55 pm–10:40 pm
"His own sound: Israel Nash's music is filled with familiar flourishes, but, to its credit, it doesn't really sound of any singular genre. There's a little of the old Laurel Canyon folk rock, a bit of psychedelia and some progressive country music. But Nash - who made his breakthrough 2013 album, Rain Plains, while living in Dripping Springs - has found a distinctive corner of roots music that's his own, as on last year's Silver Season, another set of interesting, harmony filled songs that sound like you've known them for years." Houston Chronicle

Vodeo
8:55 pm–9:35 pm
"Whether you love it sincerely or sarcastically, yacht rock is hard to pull off without sounding like an imitator or, worse, an ironist. These Vodeo cats legitimize the sound by unabashedly updating it and toughening it up. Not only are they the best nouveau yacht-rock band around, they're easily one of the best, period." Fort Worth Weekly

"The band has been able to establish itself as one of the more thrilling new live outfits around town." Central Track

Cash bars will be available from 6 pm until last call at 11:30 pm. Enjoy a global assortment of Modern appetizers and Café Modern food service in the restaurant from 5 to 9 pm. The Modern Grill will be open for dining outside on the lawn from 6 to 11 pm. Beverages and food are not included in the admission price. Bars are cash only.

Café Modern will have picnic basket dinners for two available to preorder for $45.

Baskets include assorted cheeses and fruits, crusty rolls and crackers, salads, cookies, and bottled water. A choice of wines is available with the basket, starting at $30 per bottle.

Please do not bring lawn chairs, coolers, outside food, or beverages.

Happenings in the Galleries

The special exhibition Misty Keasler: Haunt will be on view, along with selected works from the Modern's permanent collection. Throughout the evening there will be spotlight tours and art explorations. Modern 'til Midnight admission includes access to the galleries.

Thirteen themed haunted houses across America make up the imagery for Misty Keasler's Haunt, 2015-17. A driving force behind this series, which depicts interior rooms and exterior scenes, is that the subject matter takes photography to the edge of where it fails as a medium. Where photography fails, however, is the point at which Haunt, detailing the various baroque themes of the houses, creates another type of tension. It allows lingering looks - something that is not possible at actual haunts where visitors are shuttled through on a forced and darkened path - and the more we look, the more terrifying the scenes become.

These photographs are unpopulated, apart from a few gory figurative props such as severed heads, monsters, and dead bodies. Without people, the rooms themselves, in their display of psycho-narratives, become captivating portraits of personae. Who would put these rooms together this way? Who makes up the market for such places? And what does this say about American culture?

In addition to the approximately 40 photographs of haunts, this exhibition includes a separate series of about 15 portraits (out of 40) of haunted house actors in monster costumes.