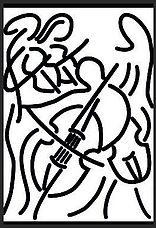 CMSFW Artistic Director has brought together an incredible group of chamber musicians for the first concert of the 30th Anniversary Season of the Chamber Music Society of Fort Worth.  In putting this concert together, Levinson explains that "we have unusual groupings such as the Prokofiev 2 violin sonatas and the Schubert string trio, but their sonority and structure make it very familiar and appealing to the ear." The title of this concert, “No Translation Necessary,” suggests that the combination of artists and repertoire speaks for itself.

Schubert's string trio, as are many of his instrumental works, is an incomplete composition, containing only a first movement and some thirty-nine bars of a second.  Schubert wrote it when he was only 19 years old and never finished it, but it remains a much loved piece of music.

The program concludes with Shostakovich's Piano Quintet in G minor. Shostakovich "wrote himself into" the quintet so that when Soviet ensembles toured with the piece they would be obliged to take him along. The trick worked: Shostakovich gained permission for plenty of travel, both inside and outside the Soviet Union.  For the CMSFW concert, another noted Russian pianist, Pavel Nersessian, will be at the piano.

Richard Young, viola, and Bion Tsang, cello, are returning to the CMSFW stage to join violinists Gary Levinson and Francesca dePasquale and pianist Nersessian. DePasquale and Nersessian are making their CMSFW debuts.