In the Theater of Life 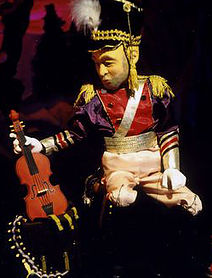 "In the Theater of Life" is the perfect title for this concert which features two works written during a time of dramatic upheaval in the lives of the composers - - Igor Stravinsky and Olivier Messiaen.

Stravinsky was a refugee living in Switzerland when he composed L’histoire du soldat.  Stravinsky's inspiration for the work was a Russian folk tale of a poor soldier who sells his soul (represented by his violin) to the Devil in exchange for youth, wealth, and power.  The work is performed by a septet that includes violin, bass, clarinet, bassoon, trumpet, trombone, and percussion.  Because the work is filled with many changing time signatures, it is commonly performed with a conductor.  Ruth Reinhardt, assistant conductor of the Dallas Symphony Orchestra, conducts the ensemble for this performance.

Olivier Messiaen's Quartet for the End of Time is a composition in eight movements for clarinet, violin, cello, and piano.  The piece premiered on January 15, 1941, at the Stalag VIIIA prisoner-of-war camp, in Görlitz, Germany. The composer had been confined in the camp since his capture in May 1940, which explains the unique instrumentation.

Messiaen shunned the usual tendency of Western music for regular rhythms and meters and instead offered ever-changing, often-unpredictable patterns. The four instruments rarely play simultaneously.  Of the quartet's eight movements, only half involve all four players: one is a solo, two are duets, and one is a trio. Even stranger, the clarinet and cello are silent for the last 10 minutes of the piece.