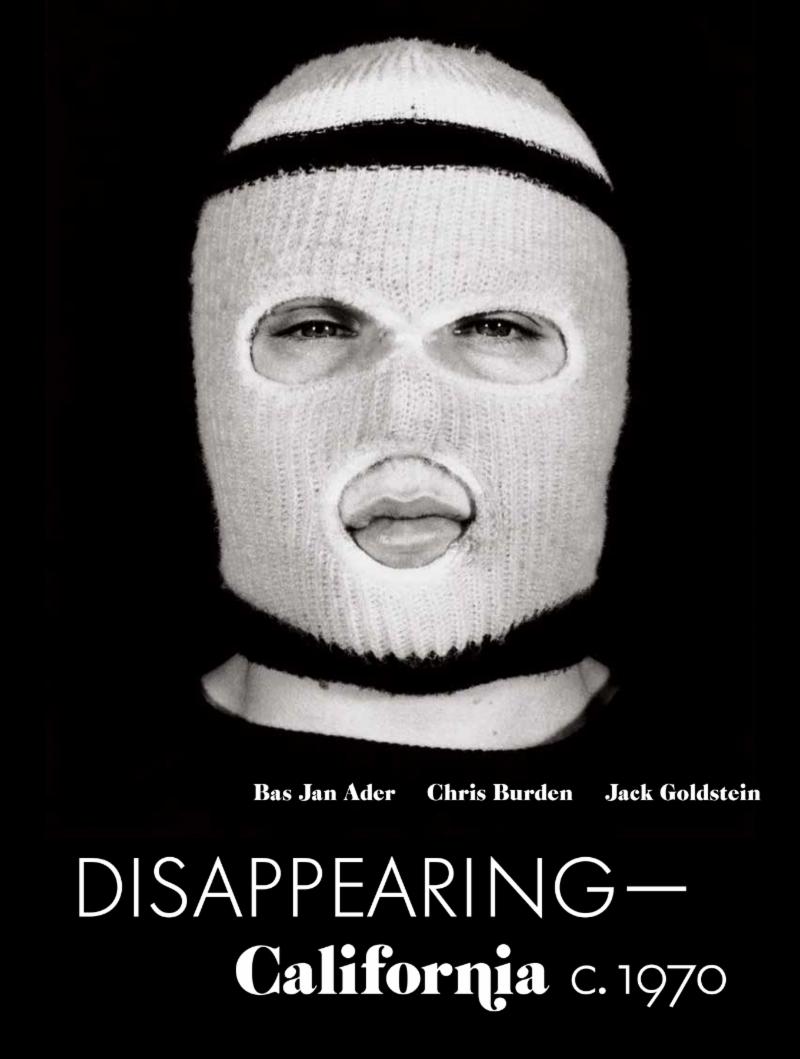 The Modern Art Museum of Fort Worth presents the exhibition Disappearing-California, c. 1970: Bas Jan Ader, Chris Burden, Jack Goldstein. These three artists shared a common interest in themes of disappearance and self-effacement, which manifested in works that were daring and often dangerous. Responding to the social and political circumstances of their time and the nascent field of feminist art, the artists used "disappearing" as a response to the anxiety of the 1970s. This major exhibition, curated by Philipp Kaiser for the Modern, reveals a fascinating intersection between major figures at a critical turning point for Southern Californian art.

In 1971, Chris Burden disappeared without a trace for three days and never revealed where he had gone. Disappearing, like his other spectacular performative actions of the early 1970s, is characterized by its concise simplicity and great urgency, and the work quite literally articulates the scope of this exhibition: around the same time the three artists Bas Jan Ader (1942-1975), Chris Burden (1946-2015), and Jack Goldstein (1945-2003) performed, reflected on, and celebrated various ways of disappearing via completely different means and distinct modes of expression. All simultaneously active in Southern California, they were not part of a particular grouping, nor were they close friends. Rather, their shared interests and approaches to artmaking speak to a specific artistic milieu of the 1970s and represent a vernacular California conceptualism.

The exhibition Disappearing-California, c. 1970 directs its gaze at the overlaps, feedback, and doubling among the three artists' works and inquires into their causes and motives. For instance, Jack Goldstein questioned his subjective presence as an artist with manifold radicality in performances, films, photographs, and installations. Only a few months after he, in 1972, buried himself alive during a performance so that only his heartbeat could still be seen as a blinking red light, Chris Burden, hidden under a tarp and marked with bright flares, mimicked an accident victim in the middle of La Cienega Boulevard in Los Angeles. Bas Jan Ader, whose body of work was often described as a reckoning with failure, articulated from the beginning a specific interest in his own disappearance. Ader staged his own disappearance in a poetic and romantic way in film, slide, and photographic works. His tragic last piece, In search of the miraculous, 1975, ended in disaster: the artist vanished while crossing the Atlantic in a small sailboat.

The reasons why the three artists devoted themselves with great intensity to disappearing are multilayered and cannot be simplified to merely a morbid tendency, though death is obviously omnipresent as a motif. On the one hand, the brutality of the Vietnam War, still in full swing in the mid-1970s, was a real disaster, specifically for young men who faced the draft. Death in war was an especially felt presence in Southern California, with its highly developed military infrastructure. At the same time, in Disappearing it becomes clear how radically the artists advanced the dematerialization of the art object and questioned their own status as the-artist-as-subject. The disappearance of the artist and the death of the author, as the literary theorist Roland Barthes proclaimed in the late 1960s, resounds in the three artists' work, which also has a deep fascination with the sublime and romanticism.

In addition to the contexts above, it is telling that Ader, Goldstein, and Burden engaged with the theme of disappearance right at the moment that feminist art became institutionalized in California. The Feminist Art Program was established at California Institute of the Arts (CalArts) in Valencia in 1971, and perhaps these male artists engaged with disappearance in response to the rise of women artists, consciously or not.

This exhibition thematizes the many implications of disappearing in the early 1970s and presents the bodies of work of three prominent California artists in full scope. With more than 40 objects - films, photographs, slide installations, objects, records, paintings, and three immersive installations - across 13,000 square feet of exhibition space, Disappearing focuses on one of the most interesting historical moments of California art.

A richly illustrated catalogue will accompany the exhibition and will include an essay by Philipp Kaiser.