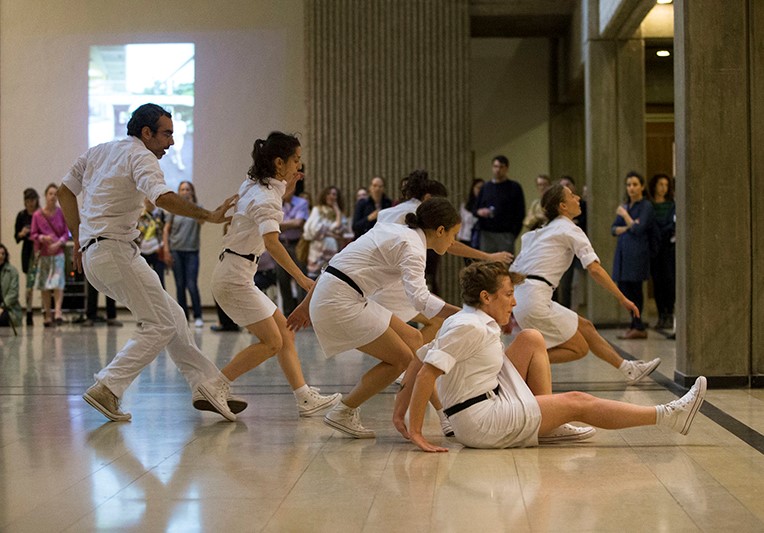 The most conceptually compelling work of art in the Guggenheim’s But a Storm Is Blowing from Paradise: Contemporary Art of the Middle East and North Africa is also its least visible. Debriefing Session II by Public Movement, a research-driven Israeli collaborative, takes the form of a secret, one-on-one meeting between a Public Movement agent and a participating audience member. Risa Puleo, “A Pair of Performances Exposes the Politics of How Museums Operate,” Hyperallergic, September 28, 2016

Alhena Katsof, Director of Strategy and Protocol for the Israeli performance research group Public Movement, focuses on recent projects with Public Movement, including Debriefing Session II, 2015, and the durational exhibition National Collection, 2015, while touching on other aspects of her work as an independent curator and writer. Reflecting on her collaboration with Dana Yahalomi, Director of Public Movement, Katsof presents a selection of projects that address art and politics in public space. By discussing the ways in which exhibition histories are part of civic choreography, she investigates the relationship between cultural institutions, social ritual, and the nation-state. Drawing on her background within the field of curatorial studies, Katsof examines the participatory nature of politics and, in particular, Public Movement’s recent body of research about Modern art made in Palestine before 1948.

With diverse interests and profound passion as an independent curator, Alhena Katsof has organized exhibitions and performances at White Columns, Andrew Kreps Gallery, Regina Rex, and with Lucie Fontaine. In 2017, she is co-curating the first US-based film commission by the artist duo Pauline Boudry / Renate Lorenz, which will premiere during a solo exhibition at Participant Inc. and travel to the Contemporary Arts Museum Houston. She co-authored the book Solution 263: Double Agent, as part of the Solution Series edited by Ingo Neirmann and published by Sternberg Press (2015), and her writing has appeared in a variety of notable magazines and books, including the upcoming anthology The Artist As Curator, edited by Elena Filipovic and published by Mousse Publishing. In addition to curating and writing, Katsof is a faculty member at the Center for Curatorial Studies, Bard College.
Photo credit: Public Movement, National Collection, Tel Aviv Museum of Art. Photo by Oz Moalem