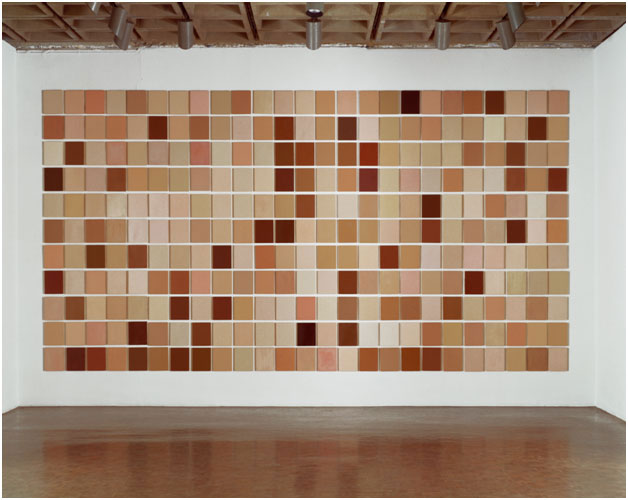 Brooklyn-based artist Byron Kim is known for his monochrome paintings, born out of representation, that seemingly challenge their relationship to abstraction. Faye Hirsch describes his work in an interview with the artist for Art in America, “You see subtle variations of color within the fields. Recalling paintings by midcentury modernists like Rothko and Reinhardt, they feel like pure abstraction, but as always with Kim, have profound ties to the world.” Recognized in the early 1990s for Synecdoche, a grouping of hundreds of small monochrome paintings based on skin tones that was included in the 1993 Whitney Biennial, Kim collaborated that same year with friend and fellow artist Glenn Ligon on the painting Black and White, which exploits the notion of “flesh tone” as a color. Kim has since moved to meditations on the sky with his ongoing Sunday Paintings (a series begun in 2001). These small and stunning presentations of the daytime sky are immediately personal, with notations from mundane to profound, that mark the moment they represent written across their surfaces while at the same time thoughtfully reference the historical Today Series by On Kawara. Kim’s devotion to his paintings and their subjects has brought him critical acclaim; he has received numerous awards, including the Alpert Award in the Arts, UCROSS, and the Joan Mitchell Foundation Grant. His work has been the subject of numerous solo and group exhibitions throughout the United States and abroad, including Korea, Poland, Spain, the United Kingdom, Germany, and Canada.

For Tuesday Evenings, Kim presents the ideas and experiences that have formed his work.

This popular series of lectures and presentations by artists, scholars, and critics is free and open to the public. To assure seating, free admission tickets are available at the Modern’s admission desk beginning at 5 pm on the day of the lecture. Seating begins at 6:30 pm and is limited to 250. A live broadcast of the lectures is shown in Café Modern for any additional guests. Lectures begin at 7 pm. The Museum galleries and the café remain open until 7 pm on Tuesday evenings during the series.