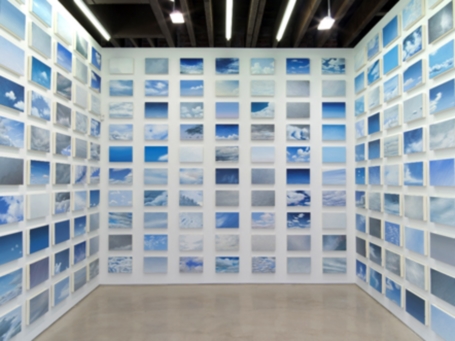 March 18 – Cynthia Daignault, a New York painter recognized for her tenacious and poetic spirit, makes work that highly regards its predecessors while honoring the present solitary and unsung moment within nature, technology, and unsuspecting spaces. With a BA from Stanford in 2001, Daignault has had early success with a 2010 MacDowell Colony Fellowship and a 2011 Rema Hort Mann Foundation Grant. Her work was well received in a 2011 solo exhibition at White Columns, and she has published two limited edition artist books, CCTV (2012) and I love you more than one more day (2013). The latter was in conjunction with her show Which is the Sun and Which is the Shadow? at Lisa Cooley in New York. In a review, The New Yorker’s column GOINGS ON ABOUT TOWN: ART suggests, “Take your time with this subtly yearning poet of a painter. Big, creamy oils breed single floating images of windows or shadows or a pale sun in fields of close-toned beige and light-blue strokes. Three hundred and sixty-five small paintings render one-a-day skies in wide-ranging styles and share the title I love you more than one more day. A restive lyricism seethes within cautious formal constraints. The work stammers on the verge of transcendence, as if having forgotten and then just half-remembering some vital thing that it was about to say.” For Tuesday Evenings, Daignault discusses her love of Impressionism and its continued influence, both on conceptual art and her work, in “Lasting Impressions: following in the footsteps of the Impressionists in contemporary painting.”