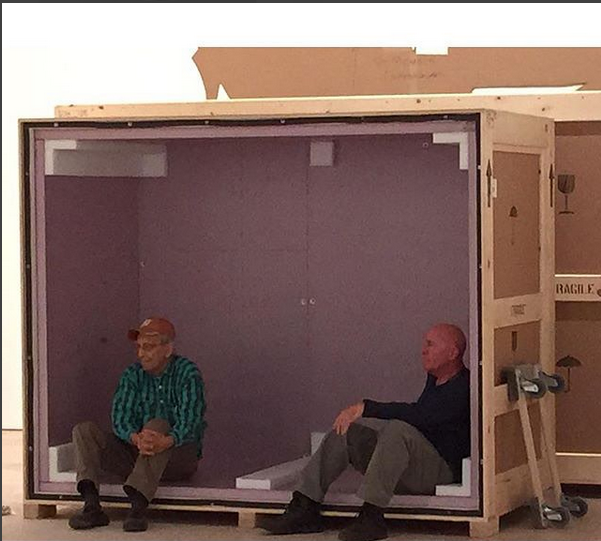 Over a 40-year career as a curator, I’ve interviewed hundreds of artists, each of them different and challenging in their own ways. However, “different” and “challenging” don’t begin to describe Frank Stella. Words like obsessed, relentlessly deductive, argumentative, self-critical, and “Malden, Massachusetts tough” (his birth place) come to mind; as do well-mannered, and well-educated (Andover and Princeton). . . . At nearly 80 years of age, Stella still seems one step ahead of the game, remaining the hyper, complex personality and deconstructionist of abstraction that brought him to international attention in the late 1950s. Michael Auping, “The Un-secret World of Frank Stella,” Voices in Contemporary Art (November 2015).

April 12 – Frank Stella and the Modern’s chief curator, Michael Auping, are in conversation as we anticipate the opening of Frank Stella: A Retrospective on Sunday, April 17. Auping, the curator and co-organizer of the exhibition, and Stella have spent several years contemplating and discussing the work and ideas behind an exhibition that spans the artist’s entire career, which began strong in 1959 at the age of 23, straight out of Princeton, with the now-historic Black Paintings and has never rested or settled as Stella continues to address the issues of painting today.

As Deborah Solomon queried for the New York Times, as a preview to the exhibition’s opening at the Whitney Museum of American Art last fall, “What does it mean that Frank Stella, 79, the champion of abstract art, has been tapped for the inaugural retrospective at the new building?” After a few proposals, Solomon goes on to ultimately answer her own question with, “Mr. Stella has done more than any other living artist to carry abstract art, the house style of modernism, into the postmodern era.”

For Tuesday Evenings, Michael Auping and Frank Stella address the forthrightness, diligence, shifts, and allegiances of the artist’s impressive career as reflected in Frank Stella: A Retrospective.

Frank Stella (b. 1936) is one of the most important living American artists. Since his first solo gallery exhibition at Leo Castelli Gallery in 1960, Stella has exhibited widely throughout the US and abroad. Early in his career, his work was included in a number of significant exhibitions that defined the art of the postwar era, including Sixteen Americans, The Museum of Modern Art, New York, 1959; Geometric Abstraction, Whitney Museum of American Art, New York, 1962; The Shaped Canvas, Solomon R. Guggenheim Museum, New York, 1964–65; Systemic Painting, Solomon R. Guggenheim Museum, New York, 1966; Documenta 4, Kassel, 1968; and Structure of Color, Whitney Museum of American Art, New York, 1971. He has  received many awards and honors, including First Prize at the International Biennial Exhibition of Paintings in Tokyo (1967); Orde des Arts et des Lettres from the French Government (1989); Gold Medal for Graphic Art Award from the American Academy of Arts and Letters in New York (1998), and the National Medal of Arts (2010). Frank Stella: A Retrospective is organized by Michael Auping, Chief Curator, Modern Art Museum of Fort Worth, in association with Adam D. Weinberg, Alice Pratt Brown Director, Whitney Museum of American Art, New York.