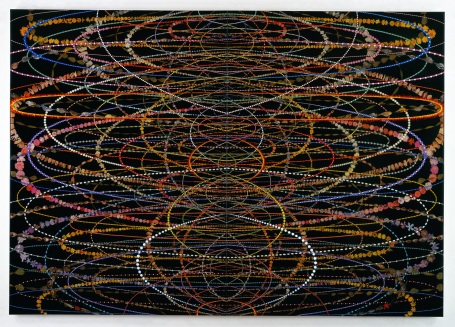 February 4 – Fred Tomaselli, featured in the Modern’s special exhibition FOCUS: Fred Tomaselli, is renowned as one of the premiere artists of today. In this Tuesday Evenings presentation, he shares ideas and work that span his career and brings us to his current endeavors. As a central figure in the 1970s punk rock and hallucinogenic counter culture, Tomaselli began making visually dynamic and conceptually loaded collages, photomontages, and paintings, eventually developing a reputation for his inclusion of pharmaceuticals, cannabis leaves, and other mind-altering substances suspended in resin as elements within collaged and painted images. In the recent interview “Better Living Through Chemistry: Fred Tomaselli's Psychedelic Art” for The Artery, the artist explains that it has been years since he’s included drugs in his work, but his themes of utopian notions nevertheless prevail. As curator of FOCUS: Fred Tomaselli, Alison Hearst writes of the work, “Tomaselli’s scenes bend reality, illustrating age-old utopian and transcendental ambitions of art.”