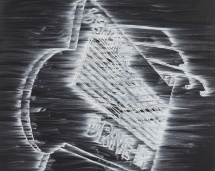 Gary Simmons, a New York-based artist recognized for his forthright address of race and culture, is probably best known for his expansive erasure drawings, originally made in chalk on blackboards that he smeared and obscured by hand to create ghostly images. One such piece, Wall of Eyes, was commissioned for the 1993 Whitney Biennial, and, more recently, the artist received critical attention for his solo exhibition Black Marquee at Anthony Meier Fine Arts, San Francisco, that referenced “blaxploitation” films of the 1970s. With an impressive exhibition record and a full-scale monograph, Gary Simmons: Paradise, Simmons is one of the Modern’s 2013 FOCUS show artists. FOCUS: Gary Simmons is on view through March 14, and for this Tuesday Evenings talk, the artist presents recurring ideas and new developments in his work.