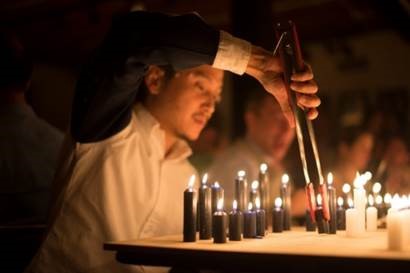 It is about the poetics of not knowing—about both mining and understanding the membrane between the known and the unknown. Glenn Kaino, in “Building Bridges: Glenn Kaino,” by Seth Hawkins, Artillery (May 2015).

Glenn Kaino, a Los Angeles–based conceptual artist who vastly expands traditional notions of artistic practice, is featured in the Modern’s FOCUS: Glenn Kaino, on view January 30 through April 17. Trained as a sculptor, Kaino is described as a “new breed of artist/entrepreneurs - an intellectual free spirit bound to no artistic genre” in an Artillery article by Seth Hawkins. Believing that “the circumstances created with art-making allow for true generative exchange to happen,” Kaino takes on a broad array of subject matter, including “space making,” magic, and software development. In 2014, he challenged the Norwegian chess prodigy Magnus Carlsen to a public chess match as a performance of Burning Boards, which was inspired by Heidegger’s statement, “The possible ranks higher than the actual.” For his FOCUS exhibition, Kaino has created new work, including a language project that supposes new space-based languages as they might result through the conditions of technology, as well as his now-signature “kitbashing” works that, according to the artist, “May offer a glimpse of a new way of knowing.”

For Tuesday Evenings at the Modern, Glenn Kaino shares the breadth, intricacies, and philosophy of his diverse practice.

Glenn Kaino was born in 1972 in Los Angeles, California, where he continues to live and work. He received a BA from the University of California at Irvine and an MFA from the University of California at San Diego. He has exhibited nationally and internationally, including solo exhibitions at Grand Arts, Kansas City, Missouri; Studio Museum, Harlem; Creative Time, New York; The Andy Warhol Museum, Pittsburgh; and the Museum of Contemporary Art San Diego. He participated in the 12th Biennale de Lyon, France; Prospect: 3, New Orleans; and he represented the United States in the 13th International Cairo Biennale. He has been in many group exhibitions at such institutions as the Montclair Art Museum, New Jersey; Blanton Museum of Art, Austin; Orange County Museum of Art, Newport Beach, California; Bass Museum of Art, Miami Beach; Museum of Contemporary Art, Los Angeles; Museum of Contemporary Art Sydney, Australia; and the Asia Society, New York.

__________________________________________________________________
This popular series of lectures and presentations by artists, architects, historians, and critics is free and open to the public each Tuesday from February 23 through April 19, with a specially scheduled presentation on May 17.
Lectures begin at 7 pm in the Museum's auditorium. Seating begins at 6:30 pm and is limited to 250; a live broadcast of the presentations is shown in Café Modern for any additional guests. A limited number of tickets (limit two per person) will be available for purchase ($5) from 10 am until 4 pm the day of the lecture online at www.themodern.org/programs/lectures. Free admission tickets (limit two per person) are available at the Modern's information desk beginning at 5 pm on the day of the lecture. The museum galleries remain open until 7 pm on Tuesdays during the series (general admission applies).
Café Modern serves cocktails, salads, and appetizers on Tuesday nights during the lecture series.
Revisit the insightful lectures from Tuesday Evenings or discover new ways to look at works in the Museum's collection with the Modern Podcasts. Hear artists speak about their work, or listen to curators' perspectives and discussions. Visit www.themodern.org/podcasts or subscribe to our podcasts on iTunes or using the RSS feed in your preferred program.