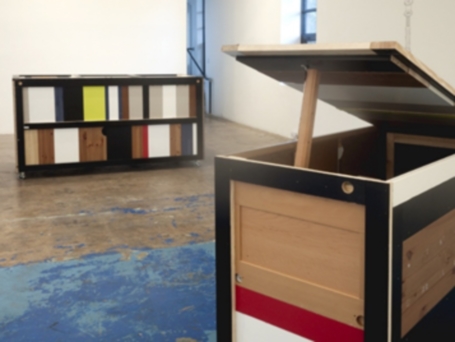 March 4 – HOMECOMING! Committee is an assembly of artists and creatives who seek to develop collaborative projects in conjunction with their individual artistic production, establishing initiatives and venues in which all manner of creative individuals can operate as co-collaborators. This relational aesthetics-like program has proven successful. The group’s first endeavor, Launch Party in 2011, set into motion what has been a flourishing exhibition and event schedule. Recently their activities have included Post Communiqué at the Dallas Museum of Art in 2013, an exhibition of faux historical displays, data, and performance meant to “blur the lines between historical fact and fictitious narrative” and questioning institutional trust as it applies to the museum as a whole; as well as being selected to participate in the 2013 Texas Biennial with Friskt kopplat, hälften brunnet (Quickly connected, half burned), an exhibition of IKEA furniture repurposed into art crates which fulfills its purpose by being shown in Sweden before going to Torsvik in Jönköping for “final waste to energy incineration.” Each HOMECOMING! Committee initiative is interactive and participatory with the generative intent of “creating an environment to springboard artists into action and build networks for future collaborations, fortifying creative resources to reposition the artist as an individual shaping cultural discourse rather than merely reacting to it.” Moderated by the Modern’s Curator of Education and artist Terri Thornton, members of HOMECOMING! Committee present the trajectory of their collaborative projects to date and beyond for this Tuesday Evenings presentation titled “In Brief.”