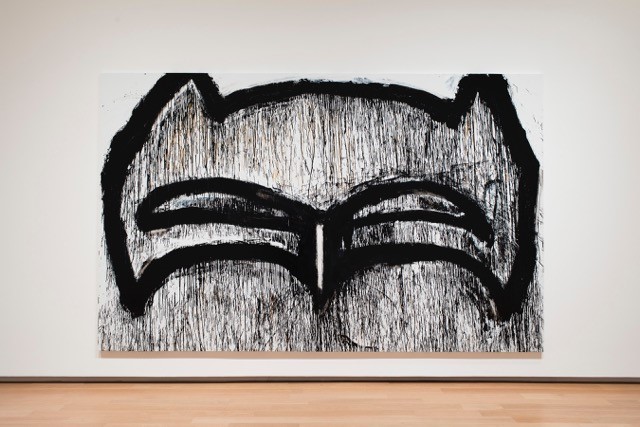 Pensato’s stark colors, economy of form, and distortion still leave her prototypes recognizable, though their features are often hollow and masklike. Her versions of these characters are pushed to the point of being tragicomic clowns, analyzing American notions of physical beauty and the dark underbelly of American culture.
Alison Hearst, Assistant Curator, Modern Art Museum of Fort Worth, FOCUS: Joyce Pensato

March 22 – Joyce Pensato is a Brooklyn-based artist whose paintings are readily recognized for their iconic subjects and bold presentation. Since the mid-1970s she has referenced and critiqued American popular culture, suggesting the influence of Pop Art while pointing to Abstract Expressionism through large, physical, drippy paintings of cartoon and comic characters such as Felix the Cat, Mickey Mouse, and Homer Simpson. Attending the New York Studio School in the 1970s, Pensato found her signature style and subject matter early in her career, merging a drawing-heavy, expressive markmaking-focused education with the pop culture figures that fascinated her in their form and content - such as the powerful image of Batman, with his ominous and formally striking mask.

For Tuesday Evenings at the Modern, Joyce Pensato presents a personal look at her career, sharing important influences from the art world and pop culture.

Joyce Pensato was born in 1941 in Brooklyn, New York, and attended the New York Studio School. She continues to live and work in Brooklyn. Pensato has exhibited widely, both nationally and internationally, including her 2013 solo exhibition at the Santa Monica Museum of Art, California, which traveled to the Contemporary Art Museum St. Louis, Missouri. Her work has been featured in many group exhibitions at such venues as the High Museum of Art, Atlanta; Centre Pompidou, Paris; Speed Art Museum, Louisville, Kentucky; Uferhallen, Berlin; Galeries Nationales du Grand Palais, Paris; and the San Francisco Museum of Modern Art. Pensato’s work is in the collections of many institutions, including The Museum of Modern Art, New York; Whitney Museum of American Art, New York; Hammer Museum, Los Angeles; Centre Pompidou, Paris; and the San Francisco Museum of Modern Art.

Image credit: Joyce Pensato, Texas Batman, 2015. Enamel on canvas. 100 x 160 inches. Courtesy of the Artist and Petzel, New York
___________________________________________________
This popular series of lectures and presentations by artists, architects, historians, and critics is free and open to the public each Tuesday from February 23 through April 19, with a specially scheduled presentation on May 17.
Lectures begin at 7 pm in the Museum's auditorium. Seating begins at 6:30 pm and is limited to 250; a live broadcast of the presentations is shown in Café Modern for any additional guests. A limited number of tickets (limit two per person) will be available for purchase ($5) from 10 am until 4 pm the day of the lecture online at www.themodern.org/programs/lectures. Free admission tickets (limit two per person) are available at the Modern's information desk beginning at 5 pm on the day of the lecture. The museum galleries remain open until 7 pm on Tuesdays during the series (general admission applies).
Café Modern serves cocktails, salads, and appetizers on Tuesday nights during the lecture series.
Revisit the insightful lectures from Tuesday Evenings or discover new ways to look at works in the Museum's collection with the Modern Podcasts. Hear artists speak about their work, or listen to curators' perspectives and discussions. Visit www.themodern.org/podcasts or subscribe to our podcasts on iTunes or using the RSS feed in your preferred program.