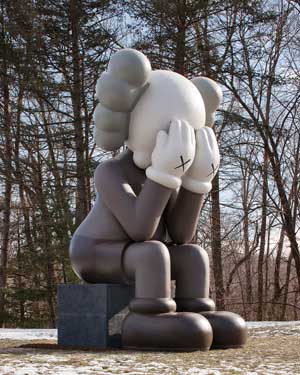 Members of the Directors Council will enjoy a cocktail reception and preview of the FOCUS: KAWS exhibition with the artist.

Reception will begin at 6 pm and remarks will be at 7 pm.

This event is exclusive to members of the Director's Council.  For more information about joining, click here.

The work of Brooklyn-based artist Brian Donnelly, who makes his art under the moniker “KAWS,” is the subject of the first Focus exhibition for the 2011–2012 season. KAWS’s vast body of work includes graffiti (early in his career), murals, paintings, and sculpture. Following along the continuum of Pop art, his work critiques contemporary consumer culture, blurring the boundaries between it and the art world. Building an artistic language, which includes altered forms of familiar animated characters, such as Mickey Mouse, the Michelin Man, and SpongeBob SquarePants, his cartoonlike hybrids are often depicted in various states of the human condition.

Most recognizable in all of his characters are the X-ed out eyes and/or hands. These Xs can be read in several ways. They serve as a simple, globally recognizable, branding device, which can be considered benign enough. Xs are used in some form in almost every field, including math, science, media, language, computers, and video games, and can have a positive or an extreme meaning. When written in a letter, the X symbolizes a kiss. In quick secession, XXX demarcates pornography. And when something is X-ed out, it is removed or negated. Read this way, KAWS’s X-ed out eyes and hands represent the virtual deaths of characters who are humanlike, but nonliving to begin with. Their implied emotional states prompt a range of emotions, from sadness to empathy to humor. In any case, we relate to them.