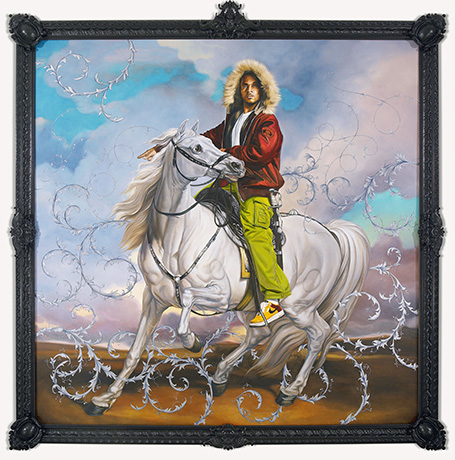 September 15 — Kehinde Wiley, the artist featured in Kehinde Wiley: A New Republic, is in conversation with the exhibition curator, Eugenie Tsai of the Brooklyn Museum, to open the fall 2015 Tuesday Evenings at the Modern. The New York Times referred to Wiley as “one of the most celebrated painters of his generation.” His large-scale canvases reiterate historical portraits by Old Master painters, but with contemporary black youth in place of the original subjects. Wiley has explained, “The stuff I do is a type of long-form autobiography, but the starting place is not me.” In the exhibition catalogue, Tsai describes the artist’s program of righting the absence of nonwhite faces in art-historical masterpieces as “using the power of images to remedy the historical invisibility of black men and women.” As the John and Barbara Vogelstein Curator of Contemporary Art at the Brooklyn Museum since 2007, Tsai has organized numerous exhibitions, with Kehinde Wiley: A New Republic receiving a great deal of critical acclaim.

This conversation between the artist Kehinde Wiley and curator Eugenie Tsai promises to offer enormous insight into an intriguing exhibition.

Image credit:Kehinde Wiley, Colonel Platoff on His Charger, 2007–08. Oil on canvas. 122 x 122 inches. Collection of the Modern Art Museum of Fort Worth, Gift of the Director’s Council and Museum purchase, 2008. © Kehinde Wiley