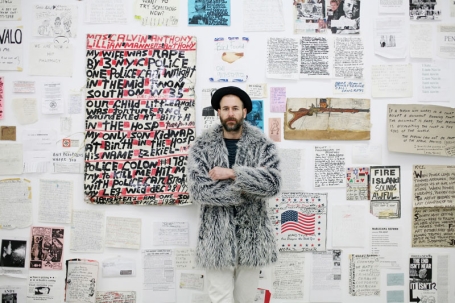 March 25 – Kenneth Goldsmith is, among many distinctions, the 2013 inaugural Poet Laureate of The Museum of Modern Art in New York and founding editor of online archive UbuWeb. With eleven books of poetry to his name, Goldsmith’s writing has been called “some of the most exhaustive and beautiful collage work yet produced in poetry” by Publishers Weekly. He was invited to read at President Obama’s “A Celebration of American Poetry” at the White House, where he also held a poetry workshop with First Lady Michelle Obama. In addition to poetry, his book of essays, Uncreative Writing: Managing Language in the Digital Age, won the 2012 Association for the Study of the Arts of the Present Book Prize. An enlightening documentary on Goldsmith’s work, Sucking on Words, was first shown at the British Library in 2007. As a poet, writer, editor, professor, and music critic, Goldsmith acknowledges few boundaries in his practice. With a BFA in sculpture from the Rhode Island School of Design, he has written about, continuously participates in, and is recognized by the visual art world, as demonstrated by his recent inclusion in the 2012 dOCUMENTA (13) with his Letter to Bettina Funcke as part of the event’s 100 Notes – 100 Thoughts book series.

For this Tuesday Evenings, Goldsmith presents “My Career in Poetry or: How I Learned to Stop Worrying and Love the Institution.”

The Modern is happy to collaborate with The Reading Room in Dallas on this occasion. Each venue offers specific insight into Kenneth Goldsmith’s work as he shares the nature and experiences of his career at the Modern, and reads his own work at The Reading Room. More information can be found at http://thereadingroom-dallas.blogspot.com/.