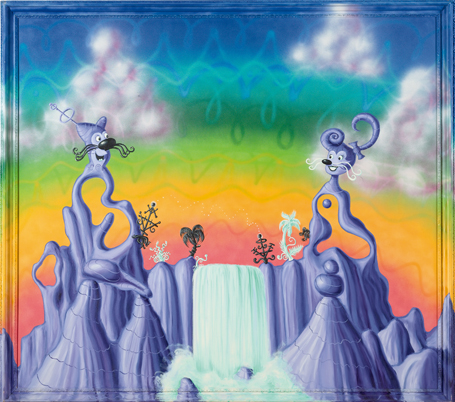 October 28—Kenny Scharf, an artist featured in Urban Theater: New York Art in the 1980s, rose to prominence in the 1980s East Village art scene and was one of the first artists to inject elements of street culture into the mainstream of contemporary art. For his 2012 solo exhibition Hodgepodge at Honor Fraser Gallery in Los Angeles, the gallery explained, “Like Warhol before him, Scharf became interested in merging the highbrow with the lowbrow, and began working towards ways of incorporating pop-culture into his paintings. As a way to rebel against the highly academic work that was being shown at the time, Scharf’s work reflected an Eden filled with animated colors and fantastical subjects ranging from the Flintstones and the Jetsons, to imaginary characters that could cast either gloom or euphoria.” Scharf himself has stated, “My ambition as a professional artist is to maintain the course that I set nearly 30 years ago by establishing my work in the fields of painting, sculpture, and performance. Every project I undertake is building on my past experiences. My original approach is unchanged; it is a personal challenge to produce the best work possible every time. One very important and guiding principle to my work is to reach out beyond the elitist boundaries of fine art and connect to popular culture through my art.”

For Tuesday Evenings, Kenny Scharf shares his work and experiences over a long and flourishing career.