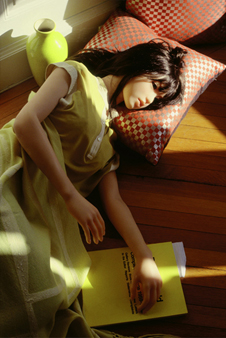 April 21—Laurie Simmons is a New York–based artist and filmmaker renowned since the mid-1970s for her psychologically and formally profound work. Her iconic, large-scale, black-and-white photograph Walking House, 1989, was recently acquired by the Modern and is featured in the current exhibition Framing Desire: Photography and Video. Having garnered an international reputation as one of the leading artists to emerge from the New York Pictures Generation of the 1970s and 1980s, Simmons has thoughtfully and methodically moved through her various photographic series, such as Early Black and White Interiors, 1976–78, in which pseudo-realities are created by staging miniature spaces with dollhouse furniture and other banal props; and Walking & Lying Objects, 1987–91, a series of black-and-white photographs of inanimate objects animated with human legs. Her most recent bodies of work—Kigurumi, inspired by a sub-genre of Japanese “costume play,” and How We See—present a transformative social experience and relate it to our relationship with social media. She continuously updates and maximizes photography’s attributes, stating early on in the 1983 exhibition catalogue In and Around the House, “I love the photographic image, the way scale can become meaningless and everything is unified within the surface. I now see that that kind of ambiguity is what drew me to working with the camera in the first place.”

For this Tuesday Evenings presentation, Laurie Simmons talks about her most recent photographic series and her upcoming feature film.