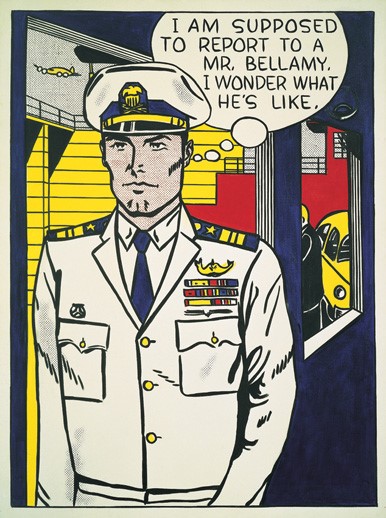 Soon after Roy Lichtenstein’s Pop paintings exploded on the art scene in the 1960s, observers grew curious about the popular roots of his work. Critics, curators, and scholars began to trace his borrowed imagery back to the comic books, newspapers, and other commercial printed media from which it came. Michael Lobel

Michael Lobel, Professor of Art History at Hunter College, City University of New York, curator, and author, presents his findings on one of the Modern Art Museum of Fort Worth’s most popular paintings. Mr. Bellamy, by Roy Lichtenstein, was painted in 1961 in the artist’s signature style of using Ben-Day dots and text balloons to mimic comic books of the day. With occasional insider art-world references accompanying the popular imagery, Lichtenstein’s paintings can be both familiar and enigmatic. This is particularly true of the Modern’s painting. As Lobel states, “While the reference images for most of Lichtenstein’s signature Pop paintings are now known, the source for Mr. Bellamy, an important early canvas in the collection of the Modern Art Museum of Fort Worth, has long gone unidentified.”

In this Tuesday Evenings presentation, “Pop and Its Sources: Reconsidering Roy Lichtenstein’s Mr. Bellamy,” Lobel highlights a new discovery—the original comic strip on which the painting was based—and explores its implications for our understanding of the artist’s work.