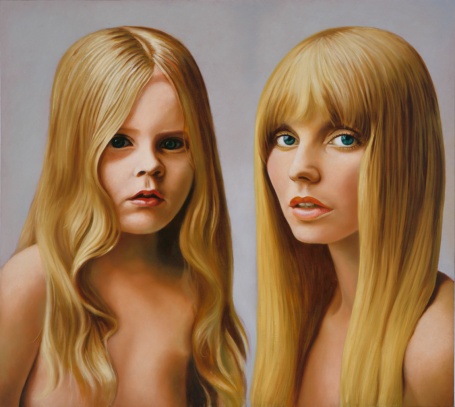 Richard Phillips is a New York-based artist known for his strikingly distinctive paintings, such as the early Girl Child, 1996-97 in the Modern’s permanent collection. Using found imagery, Phillips’s work addresses the marketability of man and his wishes, ideas, actions, identity, sexuality, politics, and desires. He translates these images into both drawings and paintings, and, in doing so, he makes use of the iconic quality of pictures, which the media and art use daily—each according to its own agenda. Recently, Phillips has begun to explore filmmaking and photography as means of moving beyond found imagery in his paintings. He completed his first film, Lindsay Lohan, in 2011. The film premiered at the 2011 Venice Biennale in tandem with his second film, Sasha Grey. His third film premiered at Art Basel’s Art Unlimited exhibition in Basel, Switzerland, in June 2012. All three films were shown for the first time in the United States alongside a group of corresponding paintings at Gagosian Gallery in New York in September 2012.

For this Tuesday Evenings presentation, “Painting Beyond Reason,” Phillips addresses a selection of works spanning his career, with an emphasis on his most recent shows at White Cube in London and Gagosian Gallery in New York and three short films.