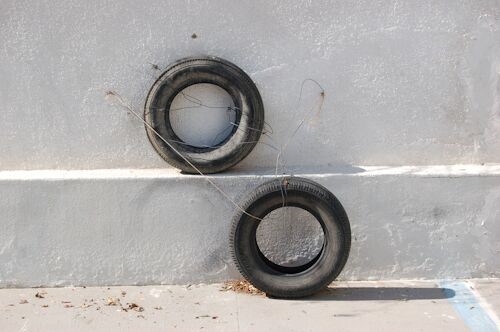 February 23 – Richard Wentworth, a leading figure in British art since the 1970s, is in dialogue with curator and writer Gavin Morrison to mark the recent publication of Making Do and Getting By.

I find cigarette packets folded up under table legs more monumental than a Henry Moore. Five reasons. Firstly the scale. Secondly, the fingertip manipulation. Thirdly, modesty of both gesture and material. Fourth, its absurdity and fifth, the fact that it works. Richard Wentworth, “Losing Battles: A Conversation between Richard Wentworth and Stuart Morgan, May 1984,” in Richard Wentworth (Lisson Gallery: London, 1984)

Wentworth’s Making Do and Getting By celebrates his photographic series of the same name. Published by Koenig Books, in association with Peter Freeman, Inc. and Lisson Gallery, the book investigates processes of perception and communication. Beyond this, it documents an excess - a creativity beyond necessary functionality, something transformative that lurks below the surface intention in acts of ordering and repair. In this ongoing series of photographs taken on his daily trajectories, Wentworth frames the art of the human hand with a light and witty touch.

For Tuesday Evenings at the Modern, friends Morrison and Wentworth take this special opportunity to consider the practice of making images and making books.

Gavin Morrison is a curator and writer based in Marseille, France, and Scotland. He is currently the Artistic Director of Skaftfell, Center of Visual Art in East Iceland, as well a director of the curatorial and publishing initiative Atopia Projects. From 2007 to 2009, Morrison was the inaugural curator of Fort Worth Contemporary Arts.