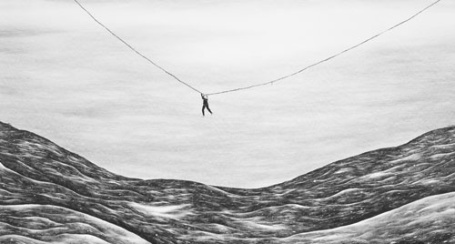 Robyn O’Neil is a Los Angeles-based artist with Texas roots whose labor-intensive narrative drawings have a cinematic flair with Shakespearean-like titles that add to their mystery and intrigue. O’Neil is a consummate learner, having begun her education in British Studies, British Art, and British Architecture at Kings College in London before settling on art. After a BFA at Texas A&M University, Commerce, O’Neil entered the graduate program at the University of Illinois, Chicago. Opportunities followed that landed her work in the 2004 Whitney Biennial and began a significant exhibition record, bringing her critical acclaim. As the 2009 Huntington Prize recipient, O’Neil focused on her studio, and in 2010, she took an opportunity to attend Werner Herzog’s Rogue Film School in Los Angeles where, in collaboration with director Eoghan Kidney, she created We, The Masses, an otherworldly animated adaptation of the artist’s skillful, dark, and enticing drawings for which she received a FRAMEWORKS Grant from the Irish Film Board and was awarded the 2012 Spirit Award at the Brooklyn Film Festival. The Modern is proud to have attained O’Neil’s seminal These final hours embrace at last; this is our ending, this is our past., 2007, which brings to a close an almost decade-long series of drawings. The sole figure in the work is “forever hanging in the middle ground of the drawing, attached to heaven by a fraying thread, suspended above a monstrous ocean wave” as the last of the artist’s “men in sweat suits.”

For her Tuesday Evenings presentation, “Ending Things,” O’Neil discerningly addresses the nature of “endings,” from the last lines of poems to final episodes of TV sitcoms, explaining that, “Endings can be inconclusive, but yet are still called ‘endings’. They are also starting points; things must end so that something else will happen. In order to be reborn, one must first die.”

Robyn O’Neil, These Final Hours embrace at last; this is our ending, this is our past, 2007. Graphite on paper, 83 x 166 ¾ inches. Collection of the Modern Art Museum of Fort Worth, Museum Purchase.