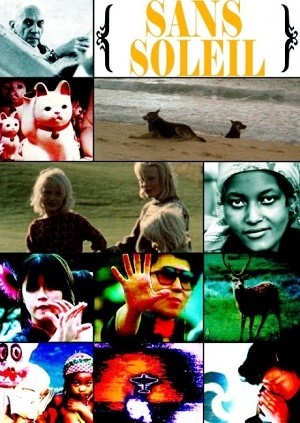 “A more modest and perhaps more fruitful approach might be to consider the fragments of memory in terms of geography. In every life we would find continents, islands, deserts, swamps, overpopulated territories and terrae incognitae. We could draw the map of such a memory and extract images from it with greater ease (and truthfulness) than from tales and legends. That the subject of this memory should be a photographer and a filmmaker does not mean that his memory is essentially more interesting than that of the next man (or the next woman), but only that he has left traces with which one can work, contours to draw up his maps.” — Chris Marker, Immemory

October 13 — Sans Soleil is a meditation on the nature of memory in an essay-like format composed of thoughts, images, and scenes from different parts of the world by the artist and filmmaker Chris Marker. The film was an early inspiration for the artist Kehinde Wiley according to writer and art historian Molly Nesbit in her essay “Fourteen Years Ago at Yale” in the catalogue accompanying the exhibition Kehinde Wiley: A New Republic. Sans Soleil is a travelogue of sorts that stretches the genre of documentary as it roams the globe, principally between Japan and Africa, reflecting on memory, time, and travel with images and a woman’s voice relaying letters from the supposed cameraman. The resulting film is as poetic as it is cinematic, as the poet Susan Howe points out in her book Sorting Facts: or, Nineteen Ways of Looking at Marker: “The French documentary filmmaker, photographer, and traveler, Chris Marker, was a poet first.”

In conjunction with Kehinde Wiley: A New Republic, the Modern screens Sans Soleil from 7 to 9 pm for this special extended Tuesday Evenings presentation.