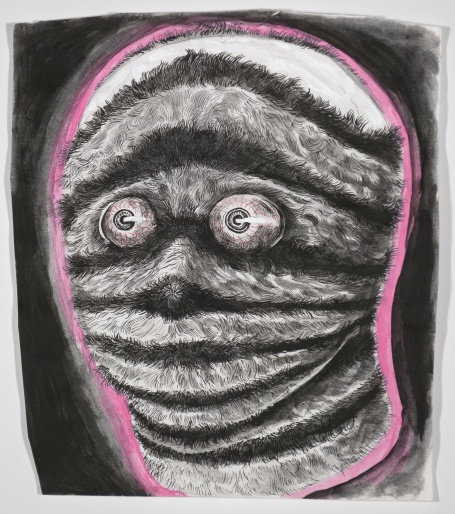 Trenton Doyle Hancock is an artist living and working in Houston, Texas, who has had an impressive career trajectory. Before completing his MFA at the Tyler School of Art, Temple University, in Philadelphia, Pennsylvania, Hancock’s work was chosen for the 2000 Whitney Biennial, and his mysterious narrative-based paintings, drawings, and installations have been in demand ever since. The Modern is proud to own a number of the artist’s etching portfolios and his impressive large-scale, mixed-media work And The Branches Became As Storm Clouds, 2003. Beyond the Modern, Hancock is well represented in the DFW Metroplex, including one of the most spectacular pieces in Gene and Jerry Jones’ collection at Cowboys Stadium. In 2008, Hancock parlayed into the world of dance with Cult of Color: Call to Color, a collaboration with composer Graham Reynolds and choreographer Stephen Mills for Ballet Austin, which received great critical acclaim, with Eleanor Heartney calling it “an exuberant mix” that “swept the viewer along in a satisfying blend of sound, imagery and movement” in an article for Art in America.

For Tuesday Evenings, Hancock presents “In Preparation of the Bring Back,” in which he shares a new direction in his work, having moved from his signature narrative into a more personal exploration as evidenced in his exhibition … And Then It All Came Back to Me at James Cohan Gallery in New York this past fall.

Trenton Doyle Hancock,  ...and then it All Came Back to Me, 2011.  Mixed media on paper, 9 x 8 inches. Image courtesy of the artist, Talley Dunn Gallery, and James Cohan Gallery.