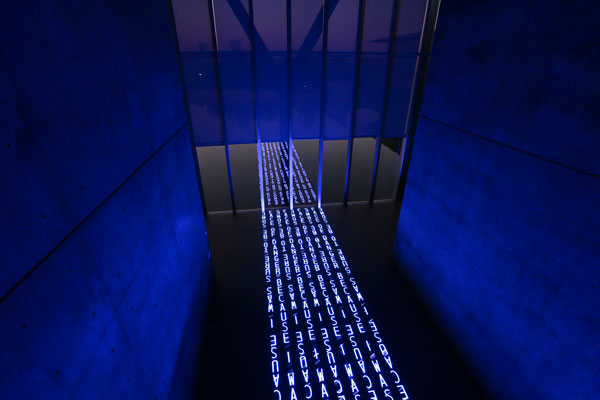 Light is integral to every visitor’s experience at the Modern Art Museum of Fort Worth. The museum’s architect, Tadao Ando, essentially treats light as a material that is as necessary as the concrete of the walls, the steel supports, the granite floors, and the sheets of glass that connect the museum interior to the nature and city that surrounds it.

to force, of inertia, to light

The role of the written word in/as art is of abiding interest to me. Whether it be language as artmaking material (as is the case with Lawrence Weiner’s work), the wall drawings of Sol LeWitt (where the instructions for carrying out a piece are as crucial as the drawing itself), or the often dense and always rich writings of the British group Art & Language (their essays being best understood as art), recent art history is brimming with artists engaging with language in order to better elucidate a specific conceptual and aesthetic sensibility.

Not Bound to the Physical

In the wake of Hurricane Sandy, it is clear that the New York gallery world has suffered a colossal blow, with scores of galleries devastated, countless works of art destroyed, and heaps of historical material washed into the Hudson. It is impossible for these events not to prove the ultimately ethereal and fleeting nature of artworks. It is from this perspective that I started to rethink one of the Modern’s recent acquisitions that is currently on view, Sol LeWitt’s Wall Drawing #50 A, 1970.

A Poem for Barnett Newman

The Spaces In Between

I recently had the opportunity to take a group of students on a tour of the galleries. Our task was to examine...

The air is tight. Visitors speak in lowered tones. The voices carry and bounce differently in here than the other galleries.

Sean Scully's Catherine series is continuously installed in the second floor galleries as part of the Modern's...

The Law of Gravity: Carl Andre and Richard Serra

When an apple inspired Isaac Newton’s treatise on the Law of Gravitation, I wonder if he foresaw...

There are a few works on view in the first-floor galleries that always catch my eye...