The Modern’s 2014–2015 Teen/Artist Project has begun, and we couldn’t be more excited about it! This year's T/AP program features a line-up of very talented visiting artists, all with interesting takes on the exhibitions the Modern will offer over the year. The first artist the program will work with is the Dallas-based Randy Guthmiller. This is a very special occasion because Randy is both a former T/AP student and intern. It’s great to welcome Randy back to the Modern.

Upon graduating from Fort Worth Academy of Fine Arts, Randy attended Hampshire College in Amherst, Massachusetts, where he found a perfect place to experiment and grow as an artist before returning to the DFW area. We are lucky to have him around.

The first day with Randy included a tour of the special exhibition Urban Theater: New York Art in the 1980s. The students were encouraged to take their time while viewing the work, focusing on a few pieces that caught their attention and drawing in their new sketchbooks. Following the viewing and sketching, everyone gathered to discuss the students’ thoughts and Randy’s intentions for the first project. He chose an iconic painting in the exhibition by the well-known artist Keith Haring to inspire the class in making a collaborative work. The piece, Red, is a gigantic black and red painting on paper. The work measures nearly 9 feet by 23 feet and has a huge visual impact in the gallery. Haring’s marks are deliberate, consistent, dense, and lively. Once you become familiar with Haring’s work, you will recognize it anywhere. 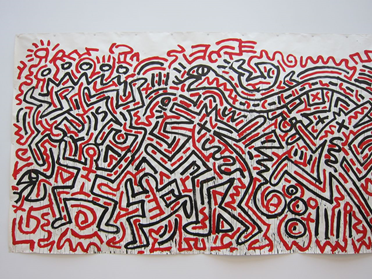 Randy instructed T/AP students to consider the manner in which Haring works, particularly in his consistent use of self-defined imagery. Each student was then encouraged to consider imagery from the works in the Urban Theater exhibition that they drew in their new sketchbooks.

Upon returning to the classroom, each student drew one of those sketches on the four-by-nine-foot canvas provided by the Modern. Using graphite, students drew a variety of images from works by Jeff Koons, Jean-Michel Basquiat, Laurie Anderson, Cindy Sherman, and others in the exhibition. Each drawing measured anywhere from 10 inches to 3 feet in length. 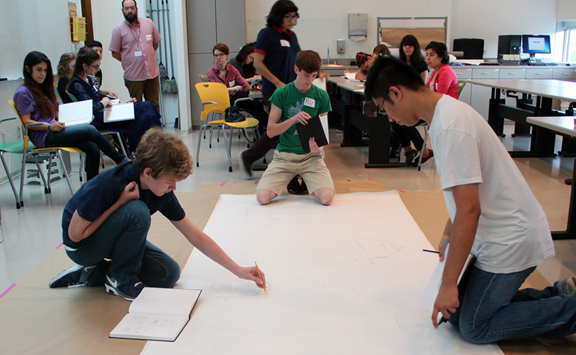 The drawings seemed to become very animated once the students incorporated dark black painted lines on top of the graphite. At first they were polite, stepping aside for the others to make their marks. In time, though, the atmosphere itself became more animated as students stretched their arms from one side of the canvas to the other, challenging themselves as they worked; it felt like an action painting at that point. 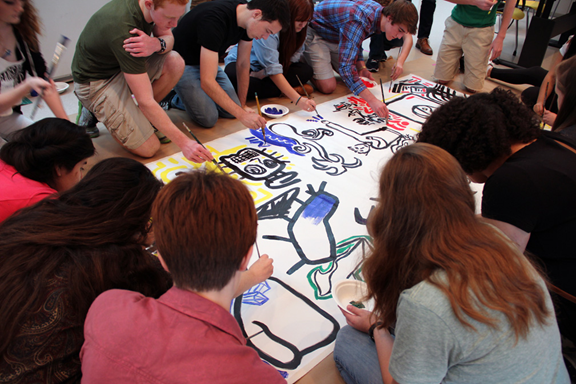 After covering the drawings in thick black paint, Randy instructed the students to use color. Then the collaborative painting seemed to develop a unique personality. 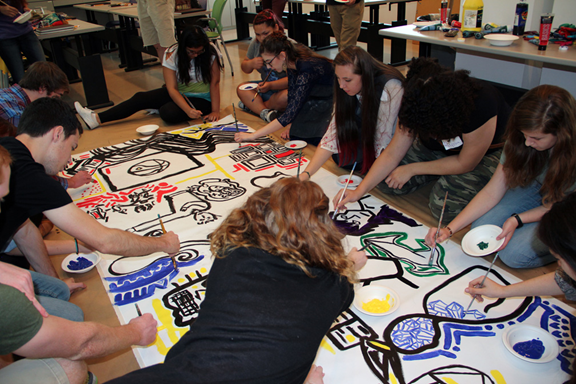 By the end of class, everyone was taking photos of the work since Randy mentioned he would post any image of the work they sent him on his blog. 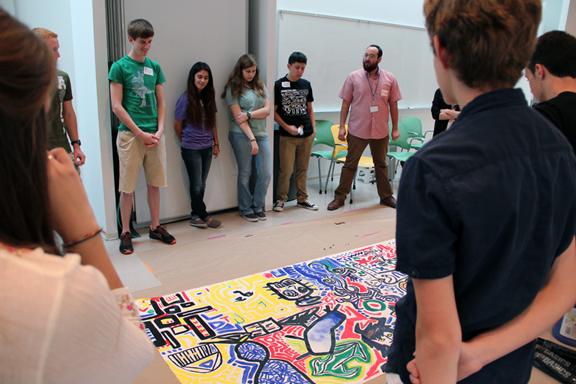 By the conclusion of class, the piece reflected the close viewing of the source works, the skills of each student, and the spirit of collaboration. Everyone contributed to several different areas of the canvas, and the finished product looked quite unified overall. Before class was dismissed, we had a group conversation about the painting and took a class portrait. We look forward to what Randy has in store for us in the coming weeks. 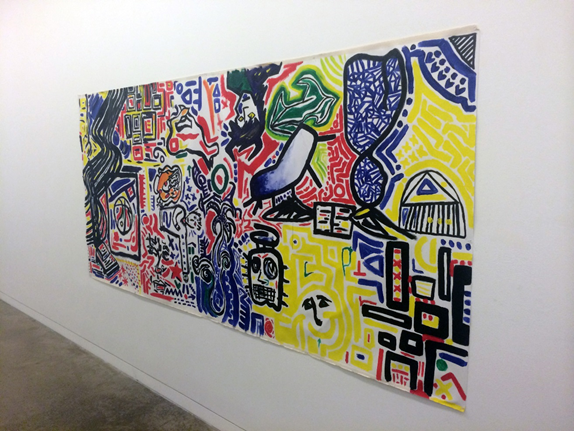 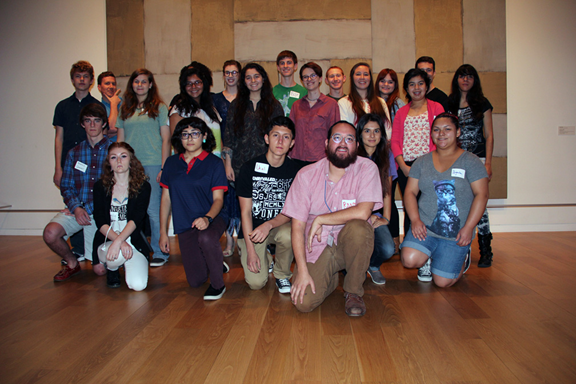