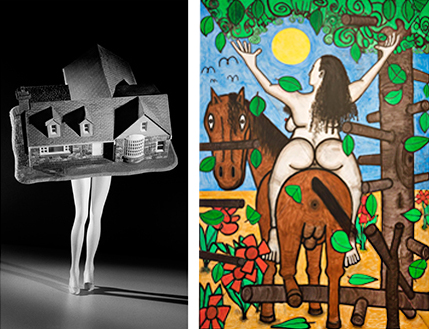 Laurie Simmons and Carroll Dunham
Tuesday Evenings at the Modern

Our so-called “pillow talk” is so much about what we do. Not the specifics of how we make our work or what happened in the studio today as much as what it’s like to move your work from your mind to the studio to the world and, like, what exactly are we doing being artists in the 21st century? Laurie Simmons, interview with Sheila Heti for Interview magazine, March 4, 2014

Artists Laurie Simmons and Carroll Dunham, both represented in the Modern’s collection, are in conversation for this extraordinary Tuesday Evenings presentation in conjunction with the museum’s survey Laurie Simmons: Big Camera Little Camera. Simmons and Dunham, two celebrated artists in today’s art world, discuss the role art plays in their life as wife and husband and how a life together informs their art. Having concurrent solo shows in New York last spring, Simmons at Salon 94 and Mary Boone Gallery and Dunham at Gladstone Gallery, the couple gave an extensive and enlightening interview for Artnet News in which Simmons recalls a lecture, similar to this one, eight years ago wherein the couple compared images from different stages of their work and, somewhat surprisingly, found just “how much of an unconscious dialogue there was…”

As Dunham lays out in his text for the Big Camera/Little Camera catalogue, “Laurie Simmons and I have been a couple for forty years, married for thirty-five. ‘Partners,’ the current term of art for such an arrangement, actually applies to us, as we have raised two children and conducted two separate but parallel art practices while both living and being together.” There is a lot of history and a lot to be learned from two artists who are gracious enough to share their work and experiences as independent artists who have made a special life together.

Laurie Simmons will sign books in the Grand Lobby from 5:30-6:40 pm before the lecture.