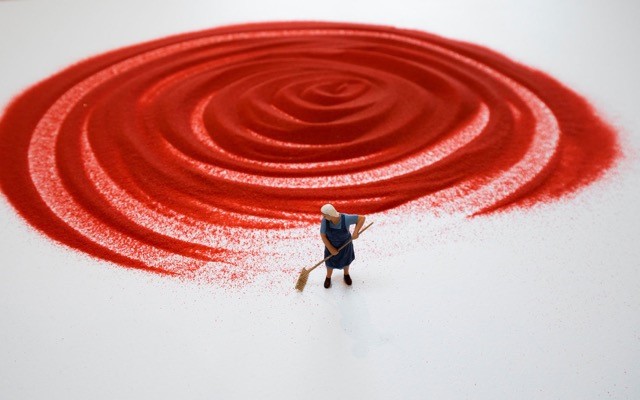 There is also something to be said for zooming out from the granular political immediacies and considering the bigger picture. . . . Liliana Porter’s El hombre con el hacha y otras situaciones breves, Venecia 2017 (Man with Ax and Other Brief Situations, Venice 2017), for example, installed near the end of Arsenale, offers a panorama of miniature tableaux in which human life and labor are laid out in scenes that are at once touching, trivial, and sublime: A man smashes junk into tiny smithereens; a woman rakes a vast sweep of red particles; another sits alone knitting an ocean. Claire Bishop, “The Long View,” Artforum, September 2017

Argentina-born and New York–based artist Liliana Porter is known for her use of objects as protagonists in seemingly charming but often subversive works, from large sculptural installations to films. Affiliated with the pioneering wave of Latinx artists, Porter’s work was represented in the Pavilion of Time and Infinity, part of curator Christine Macel’s Viva Arte Viva exhibition at the 2017 Venice Biennale, and is included in the 2018 exhibition Radical Women: Latin American Art, 1960–1985 at the Brooklyn Museum in New York and the Hammer in Los Angeles, California.

With a particular interest in the subject of representation, Porter works across media producing “theatrical vignettes” that, as she explains, are “constructed as visual comments that speak of the human condition.” For this Tuesday Evenings presentation, Liliana Porter presents work from across her industrious career and ideas such as her interest in “the simultaneity of humor and distress, banality and possibility of meaning.

This popular series of lectures and presentations by artists, architects, historians, and critics is free and open to the public. Lectures begin at 7 pm in the Modern Art Museum of Fort Worth's auditorium. Seating begins at 6:30 pm and is limited to 250; a live broadcast of the presentations is shown in Café Modern for any additional guests. A limited number of tickets (limit two per person) will be available for purchase ($5) from 10 am until 4 pm the day of the lecture online at www.themodern.org/programs/lectures. Free admission tickets (limit two per person) are available at the Modern's information desk beginning at 5 pm on the day of the lecture. The museum galleries remain open until 7 pm on Tuesdays during the series (general admission applies).