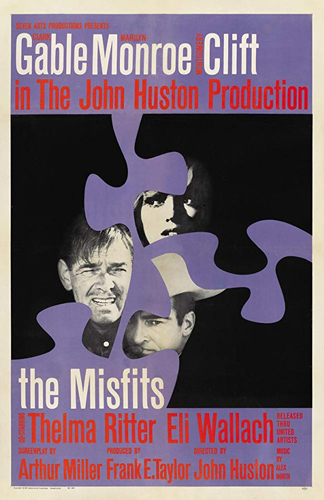 The Misfits
Tuesday Evenings at the Modern

Directed by John Huston, The Misfits is a 1961 American drama written by Arthur Miller and starring Clark Gable, Marilyn Monroe, and Montgomery Clift. It marked the last completed film of both Gable and Monroe. The plot centers on a recently divorced woman (Monroe) and her time spent with a cowboy (Gable) in the Western Nevada desert in the 1960s. The film is referred to by Simmons in My Art when Ellie reminds the gardener, Frank, when they are preparing to take on the roles played by Monroe and Gable, “It’s exactly about the impossibility of us ever being able to be them.”