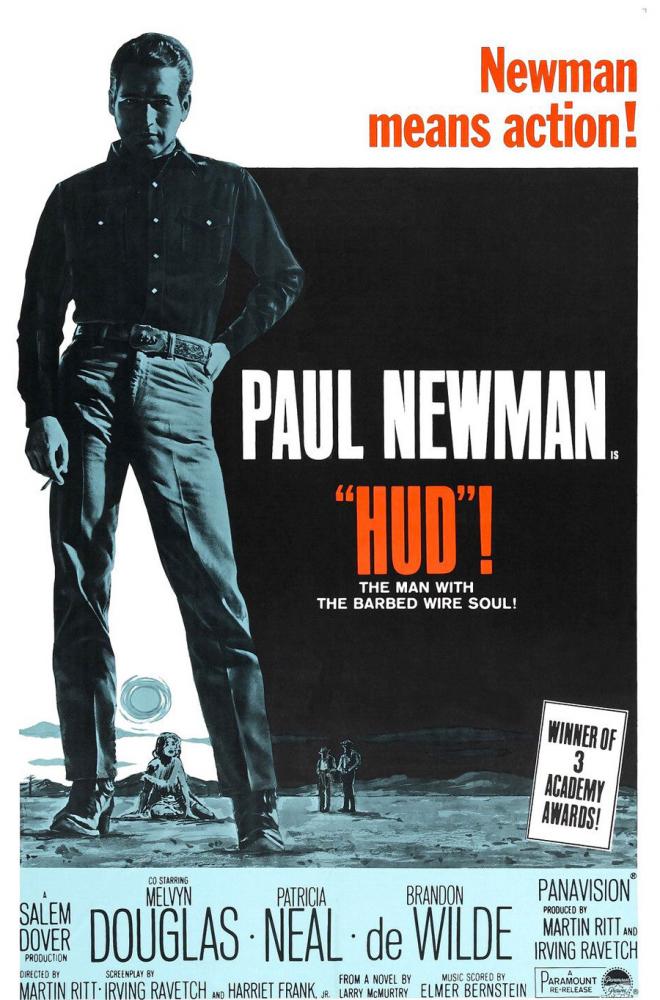 Hud, which premiered at the Venice International Film Festival, was a critical and commercial success at its general release. It was nominated for seven Academy Awards, winning three: Patricia Neal won Best Actress, Melvyn Douglas won Best Supporting Actor, and James Wong Howe won for Best Black and White Cinematography. Howe's use of contrast to create space and his selection of black-and-white was acclaimed by critics. In 2018, the film was selected for preservation in the United States National Film Registry by the Library of Congress as being "culturally, historically, or aesthetically significant.”

Based on McMurtry’s novel Horseman Pass By, Hud is a 1963 American Western drama film directed by Martin Ritt and starring Paul Newman, Melvyn Douglas, Brandon de Wilde, and Patricia Neal. Hud was filmed on location in the plaintive nether regions of the Texas Panhandle and was one of the first revisionist Westerns, choosing to showcase an antihero rather than the typical triumphalist.

The film centers on the ongoing conflict between principled patriarch Homer Bannon and his unscrupulous and arrogant son, Hud, during an outbreak of foot-and-mouth disease that put the family's cattle ranch at risk. Lonnie, Homer's grandson and Hud's nephew, is caught in the conflict and forced to choose which character to follow.