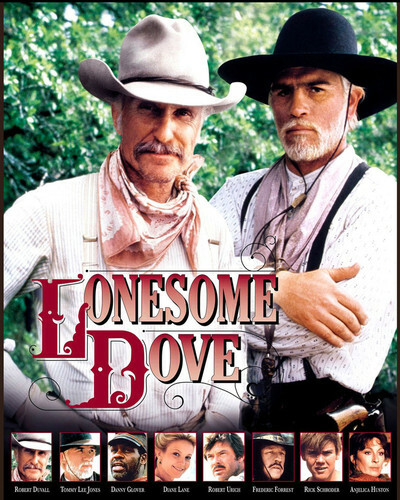 Prepare yourself for a cinematic experience as epic as a Texas cattle drive! More than any other work of McMurtry’s, Lonesome Dove showcases his extraordinary storytelling abilities. We’re showing this four-part miniseries adaptation of the Pulitzer Prize–winning novel in its entirety during a fun summer weekend marathon session. The television miniseries stars Robert Duvall and Tommy Lee Jones and was directed by Simon Wincer. Originally broadcast in 1989, the series drew a huge viewing audience, earning numerous awards and reviving the television Western.

An estimated 26 million homes tuned in to watch Lonesome Dove, unusually high numbers for a genre considered dead by most people. An enduring favorite with audiences, as well as critics, the Western garnered many honors and awards. At the 1989 Emmy Awards, the miniseries had 18 nominations and seven wins, including one for Wincer. Lonesome Dove also won two Golden Globes, for Best Miniseries and Best Actor in a Miniseries (Duvall).
Join us for this special opportunity to see this great work of art on a large screen.

Bud Kennedy is the dean of Dallas-Fort Worth newspaper columnists. A homegrown Texan and Fort Worth guy, he started out covering high school sports for the Star-Telegram in September 1971, six weeks before the premiere of The Last Picture Show. Covering his passions—news, politics, and food—for 30 years, he has reported from seven national political conventions, a presidential inauguration, two Super Bowls, and the White House Correspondents' Dinner.

He has written often about Texas writers, first meeting Larry McMurtry in his "Booked Up" store in Washington, DC, and writing about his work and life as a bookseller. Kennedy covered McMurtry’s guest role at the reopening of the Royal Theater in Archer City. He can tell you where the name "Lonesome Dove" came from—and what restaurant gave the writer the name.


Dr. Louis Black is a legendary cultural force in Texas’s film world. As a co-founder of SXSW, he helped originate the festival’s film component. His love of film dates to his teens when he would skip school with friend Leonard Maltin to visit film sets (once meeting Buster Keaton) and watch as many films as possible. He obtained a master’s degree and PhD in film from the University of Texas at Austin. He was an original board member of the Austin Film Society, led by Richard Linklater. In 2000, along with Texas Monthly editor Evan Smith, he launched AFS’s “Texas Film Hall of Fame.”

Most recently he co-directed the documentary Dream is Destiny about Richard Linklater. He was the executive producer of Be Here to Love Me, A Film About Townes Van Zandt and was a producer on the Peabody Award–winning The Order of Myths. He has focused recently on reissues of classic Texas films (Eagle Pennell's The Whole Shootin' Match and Tobe Hooper's Eggshells) and is also working on documentaries and narrative films.