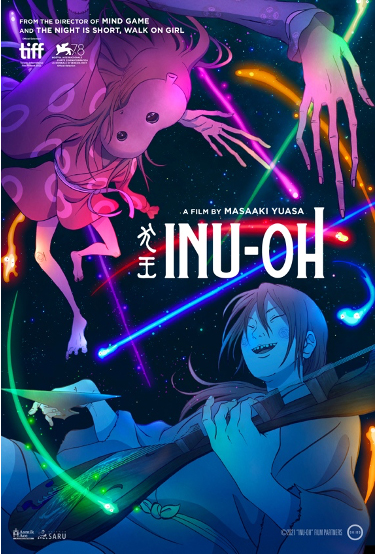 Masaaki Yuasa (Ride Your Wave, Mind Game, Lu Over the Wall, The Night is Short, Walk On Girl) is one of the most exciting and imaginative anime directors and one whose work Anime at the Modern has featured for several years. This year, we are proud to present his newest film, Inu-Oh, during its theatrical run in the US. Set in the Muromachi period (14th through 16th centuries), the film tells the story of Tomona, a blind musician who plays the biwa, and Inu-Oh, a horribly disfigured Noh actor who loves to dance and perform while wearing costumes and masks to hide his appearance. Together, these two marginalized artists combine to become popular with the masses, but their work ultimately proves to be politically contentious to the samurai rulers. Only Yuasa’s imagination could take traditional biwa music and turn it into an anime rock opera. “Inu-Oh unfolds like a mash-up between the Japanese legend The Tale of the Heike and Queen’s Bohemian Rhapsody.” David Ehrlich, Indiewire.com.

ANIME AT THE MODERN

Join us as we celebrate the Japanese anime genre -- films that are visually stunning and imaginative, with poetic stories that will pull at your heartstrings. We are excited to screen several recent releases, including the US premiere of Inu-Oh. The Modern Shop will have Japanese-inspired snacks and exclusive merchandise for purchase.

Anime otakus will not want to miss this one-of-a-kind experience at the Modern!

While you’re visiting, browse the galleries and view the Women Painting Women exhibition. Make plans to enjoy some delightful eats at Café Modern before the film.

All screenings will be held in the Modern's auditorium. Tickets are $10; $8 for Modern members; and $7 for Reel People members. Cinematics who are enjoying the weekend’s entire selection of films will receive a discount for pre-purchasing all of their tickets together. Tickets go on sale Tuesday, July 19. Tickets may be purchased in advance online at www.themodern.org/films or by visiting the museum’s admission desk.

All films feature introductions by Dr. Marc Hairston, with Dr. Christine Veras joining him for the showing of Inu-Oh.